The Observer was sitting at Hooters, in one of the establishment’s “finest booths” (our request), daintily sipping a Banana-Rama piña colata, and watching Vice‘s notorious co-founder Gavin McInnes imploding. “Why would I have gone all the way upstate to eat piss-covered cornflakes??” he screamed into our cell phone, drawing stares from the lunch crowd of really sad-looking single men. Beneath his dirty blonde beard, Mr. McInnes was turning beet red. “Why wouldn’t I have ate the piss cornflakes in my house? Or in the office???”

We couldn’t hear what the person on the other end of the line is saying, but whatever it was, the author of the new memoir of How to Piss in Public (Scribner, March 20) started to foam at the mouth in response. “I just told you why I pissed in the cornflakes! It was for the DVD! It matched with the card up your ass trick in the movie!”

Another pause, and Mr. McInnes (pronounced, for the last time, like McGuinness but with no “G,”) started to stress points at an incoherent, rambling speed.

“I don’t lie, dude! You got duped by your own prank!” he yelled at one point.

“I had already done it two weeks before the Gawker thing!” he said at another. Before hanging up, he has been reduced to schoolyard insults:

Before his semi-meltdown, the inflammatory jokester who once referred to Jesus as a gay Jew on Bill Maher’s show, had told me two things: He couldn’t remember anytime someone had “got him” with a good prank, and that as he’s grown older and raised a family, he’s really mellowed out.

We were happy to prove him wrong on both points.

In order to explain  The Observer‘s long con on Mr. McInnes, you have to know a little bit about his personal history. The Canadian-born 42-year-old is probably best known for his Do’s and Don’ts column in the early days of Vice magazine, which he started with Suroosh Alvi and Shane Smith in 1994. If you know that, then you probably also know of his inglorious removal from the company after Viacom started funneling money into the site for a video content vertical, VBS.TV, in 2007.

This incident takes up only a small section of Mr. McInnes’ memoir. He writes merely that “we negotiated a split and by the beginning of 2008 I had sold my shares for an obscene amount of money.” He also compares his leaving Vice to a band that breaks up because “they don’t like each other anymore, or more importantly, they don’t respect what the other members do.”

What Mr. McInnes did, essentially, was cause trouble. He got into fights (physical and verbal), took a ton of drugs, hung out with weirdos and freaks (and the occasional genius), and fucked with the media. He was a liability.

After his departure, Mr. McInnes founded the website StreetBonersandTVCarnage.com with his friend, Derrick “Pinky” Beckles. The site was a collection of Do’s and Don’ts type photos (except now they were called Street Boners), video mashups from Pinky, and inflammatory columns by Mr. McInnes and his friends. (Full disclosure: The author is responsible for a short-lived column of terrible sex advice on the site.)

Even with the leash Vice kept him on, Mr. McInnes always liked to screw with other media outlets. In a chapter titled “Lying to the Press” he outlines his elaborate hoaxes, like dressing up as a Nazi skinhead for an interview with The New York Press, setting up a fake pitch meeting with MTV for the benefit of a journalist from Ottawa’s Citizen, and convincing The Village Voice he had been knocked out by an MMA fighter he had randomly “chosen” after putting out a blog post offering to fly out on his own dime and fight anyone who was willing to go into the ring with him.

The strange part of that last prank, which The Voice ran in a 2009 feature called “Gavin McInnes Gets Knocked the Fuck Out” was that it was mostly true. Mr. McInnes had been destroyed in the ring by an MMA fighter, a member of an Oakland gang called the East Bay Rats that Mr. McInnes was trying to join for a Current TV series called The Immersionist. The “joke” was that the footage that The Voice saw was from the un-aired 2008 series…Mr. McInnes’ call on his blog to fight anyone was made after he had already gotten “knocked the fuck out,” and was an excuse to put the footage to some use.

Now, some may consider that a weird “gotcha” moment…either way, he was knocked out, right? It was much the same with a 2010 prank on Gawker, after the site failed to name him Hipster of the Decade. Posing as Street Carnage’s editor Arvind Dilawar, he wrote in to Gawker’s tips and concocted an elaborate scheme in which Gavin McInnes would be forced to eat piss-covered cornflakes should he win the contest.

He lost, but “thinking” that he’d won thanks to Mr. Dilawar’s supposed Photoshopping of the results (in fact Mr. McInnes had done the doctoring himself), he sent a video to Gawker showing him eating his own urine with breakfast cereal.

Now, the prank wasn’t that the cornflakes were not soaked in urine. They were. The joke was that Mr. McInnes had filmed himself eating pee-flakes months before, for a 2009 Sundance film called Gavin McInnes Is an Asshole, but he’d ended up leaving the footage on the cutting-room floor because “it was too gross.” Not wanting to waste a good video of piss consumption, he sent the clip to Gawker under Arv’s name, letting the world believe for a short while that he had been fooled.

Again, shame on us for believing him, but the fact remains that Gavin McInnes ate his own piss. Only the dates and the motives were changed.

This is where we came in. Mr. McInnes likes to screw with people, but he does not want to be considered a liar, especially since some of his real-life stories are so extreme. So in his memoir, he offers a $1,000 reward “to anyone who proves that an event narrated in these pages didn’t occur.”

Except when we prove that he is. During lunch, we produced several old emails between ourselves and Mr. Dilawar, wherein the former editor boasts that the he actually did fool his boss for the Gawker stunt. Mr. McInnes’ first response was to shake his head. “That’s impossible…Arv was totally in on the joke,” he said. “I mean, he knew we had shot the footage earlier, up in my summer home upstate. You can see in the video that I’m in that house, not where I live in Brooklyn. So why would I drive up to my summer home to eat piss-covered cornflakes for losing a bet?”

“Let’s call Arv,” he suggested. We concurred, and soon the two old friends were screaming at each other over the factual discrepencies of time and place (again, not whether or not the cornflakes were consumed, because that was just a given). Mr. McInnes was sweating: he didn’t want to have to cut a check to a journalist for a $1,000 for lying in his book…that would be bad press on so many levels.

“I have the footage,” Mr. McInnes seethed after hanging up on Mr. Dilawar, “and I can get you the filmmakers to tell you when it was shot.”

We mulled that over. “Well, that’s just their word against his.” We demanded our money.

“I don’t know why I’m so angry…this is ridiculous,” Mr. McInnes sputtered. “I shot that video before the Gawker contest, that’s just the truth.”

“Yes,” The New York Observer agreed sweetly. “Arv said you’d be pissed when we came up with this.”

It took a moment for the double-cross to sink in. “You mean…Arv was lying right now?” Yes, he was. In fact, he had helped us forge the old emails, providing helpful details to get under Mr. McInnes skin…like the fact that the date of the video would be hard to prove, since it didn’t end up on the DVD.

We waited for Mr. McInnes’ response to getting played as hard as he had played the Village Voice and Gawker. He stared at us for a moment, got up from his chair, and walked halfway across the room.

Then he started laughing hysterically. “That was so good!” he gasped, clapping. “That’s the best prank anyone’s ever played…because I literally just promised myself yesterday that I wasn’t going to get myself upset like that anymore.”

“And you taught me a lesson,” Mr. McInnes said, clearly warming up to the subject. “It’s not because they say they have different information…you can take it or leave it. But when someone is holding up a fork and saying ‘This is a knife, this is a knife,’ you start getting indignant. You get angry because you lay it all out there, you know the truth, and it seems so simple, and someone else is saying ‘I don’t see it.’ You get so worked up you’re just like ‘Blah, what? Gah!’ Then you sound like the person who doesn’t know what they’re talking about.”

We didn’t get our $1,000 check, but we did have Mr. McInnes sign the back of our Hooters check with proof that The Observer had pulled one over on the ultimate media prankster. (The blue ink is Gavin’s, the orange is just what our Hooters waitress wrote. A nice sentiment.) 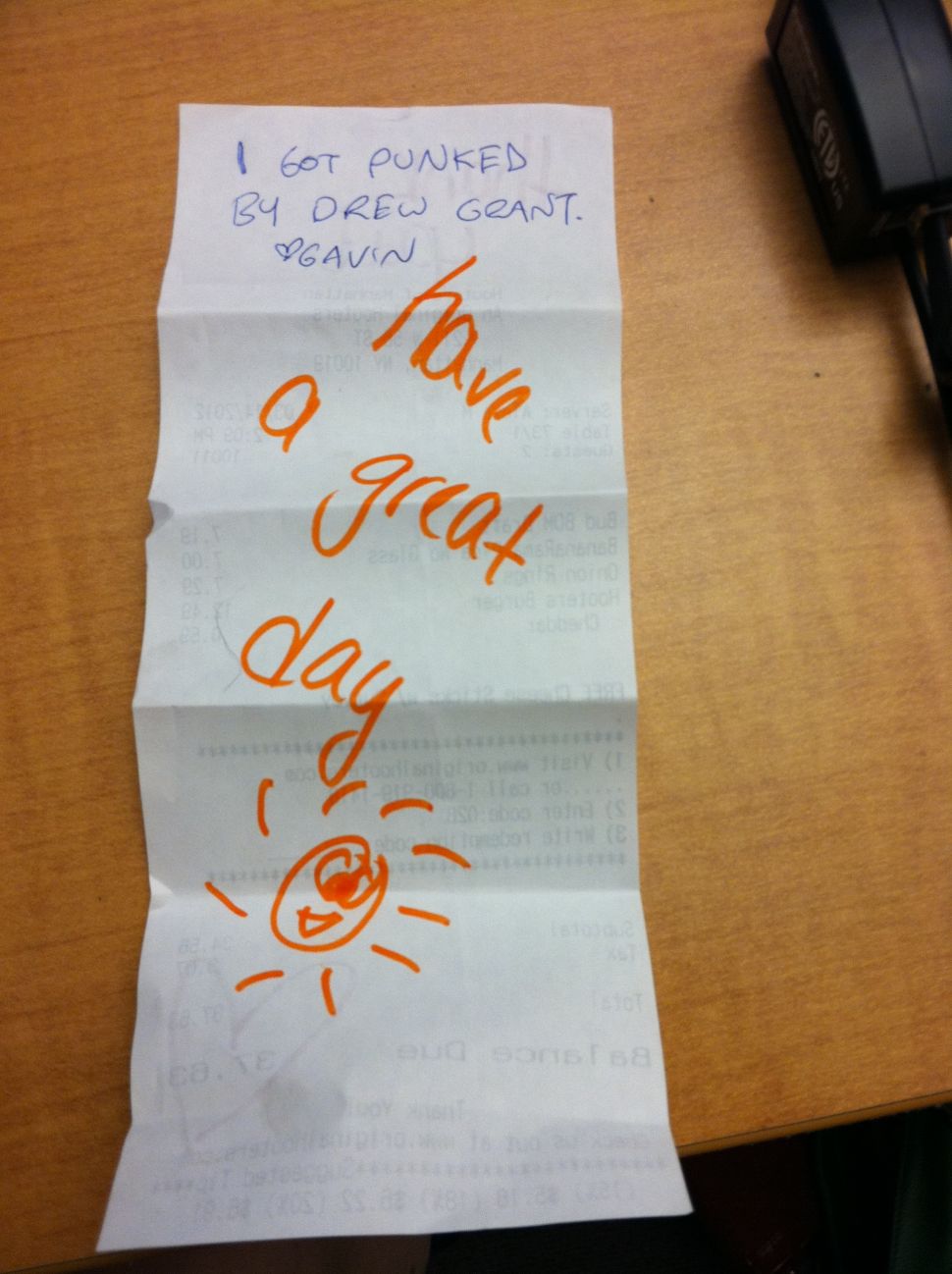