And then there were four.

“I pray my legacy will remember me as a man who was dedicated to serve his constituents well,” said the veteran mayor. “My political career and support of my constituents are evidenced by my advancement in the Township of Irvington. I humbly submit, I have never lost an election to date and ran unopposed for a second term in May 2006. I am grateful to be the first chief executive of Irvington to accomplish this feat since Mayor Robert H. Miller in 1978. In November 2006, I was installed as the president and chairman of the 26-member NJ Urban Mayors’ Association and still serve in that capacity today. By the grace of God and the will of the people I was elected to an unprecedented 3rd term in office.”

“I am no stranger to the Halls of Congress,” said Smith. “I have been engaged in the Halls of Congress in my various roles as an elected official and public servant. Through my experiences as Mayor of the Township of Irvington for the past 10 years and President of the NJ Urban Mayor’s Association I have learned how to work successfully within the Congressional System.

“I believe that I represent the hope that Congressman Payne spoke of during his life about instilling hope in the people from Newark,” the mayor added. “I am a native Newarker who was born and bred in the city; attended the public schools; lived in various locations; and I understand the city and the people. I have some unique perspectives that I and the people supporting me who are urging me to run believe will serve the residents of the 10th Congressional District very well. As of today I am a certified candidate competing to serve as the next Congressman of the 10th Congressional District.” 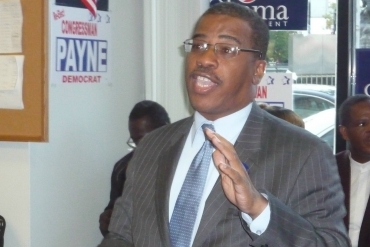