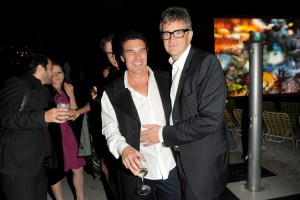 For the latest edition of the Financial Times‘ much-loved “Lunch with the FT” column–even politically engaged curator Okwui Enwezor recently admitted he’s a fan–Jackie Wullschlager sat down with White Cube owner Jay Jopling at the restaurant Zucca in London. It was Mr. Jopling’s first lengthy interview in a decade: he’s promoting the opening of the fourth White Cube gallery, in Hong Kong.

Though there were no bombshells, Mr. Jopling offered a nice overview of his life as the son of a member of the Thatcher government turned art dealer. One of his early jobs was selling fire extinguishers–“he would set his sleeve alight to demonstrate their effectiveness.” He also convinced Christie’s to give him a rent-free space to begin his gallery, in 1993.

Here’s his advice for gallerists:

Our job is to create the boundaries in which the artist can best make his work – from facilitating to archiving. Christian Marclay came to me with the idea for ‘The Clock’, and we had nine people looking at films, cutting out bits, for two years. I knew it would be extraordinary, everyone would want it. As a dealer, the greatest thing you can have is an appreciation of art, lack of preconceptions – and extraordinary stamina. You’re nurturing artists’ careers, strategising at a business level, you have to be a showman, and you’ve got to travel exhaustively.

Since this is Armory Week in New York, here’s a GalleryBeat clip of Mr. Jopling at the 1995 Gramercy International Art Fair (the predecessor of the Armory Show) with Tracey Emin.