New York Post scribe Jeanne MacIntosh reports today that she—and not her editor, Col Allan—is the paper’s connection with alleged Mommy Madam Anna Gristina. Her story contained a false assertion, namely that we claimed “that the editor in chief of the New York Post, Col Allan, had a close friendship with Gristina and suggested that he had allowed that relationship to interfere with his professional responsibilities as the paper’s top editor.”

In fact, our story said no such thing. We never claimed that Mr. Allan was friends with Ms. Gristina, only that she said he was on surveillance audio.

Our reporting indicated that multiple sources had reported the existence of a surveillance tape on which Ms. Gristina boasted about a personal relationship with Mr. Allan. We were not able to determine whether the alleged madam’s claim was true or not, and never claimed to.

Our story clearly stated: “Ms. Gristina reportedly boasted of her years-long close association with the editor, whom she referred to as a ‘very, very good friend,’ and explained that she had personally been responsible for tips leading to more than a few of the Post’s most memorable cover stories.”

Mr. Allan released a statement yesterday insisting that the Observer story was “untrue.” Ms. MacIntosh, the writer behind several of the Post‘s stories on the Gristina case, including the paper’s exclusive jailhouse interview—explained in her piece that she has used Ms. Gristina as a source for “several stories” she’s written for the paper—a rare case of a journalist identifying a source.

Ms. MacIntosh paid her source another visit on Rikers Island after our story ran. During that meeting, Ms. Gristina denied any knowledge of Mr. Allan, insisting, “I don’t know who Col Allan is. I have never met him. I have never heard his name until today.”

Ms. Gristina went went on to explain to Ms. MacIntosh that she had been approached in 2008 by a woman being questioned as an escort for madam Kristen Davis. The woman was concerned about appearing in the press. Ms. Gristina said her response to the woman might have  appeared on the surveillance tape. She recalled telling the woman that “I had a relationship with someone at The Post [meaning me, Jeane MacIntosh] who was a good friend, and that I had provided information to The Post in the past.”

Ms. Mcintosh did not indicate whether she helped to squelch any item about Ms. Davis or the escort.

Today, attorneys for the New York Post sent The Observer a letter requesting that we report that:

Furthermore, a letter from an attorney of Anna Gristina’s to Mr. Allan noted:

“My client has specifically indicated that and has never met you nor had any relationship, either business or otherwise, with you. Indeed, she has never spoken your name. Any statement to the contrary is absolutely false.”

Is it possible that Mr. Allan and Ms. Gristina are not acquainted? Of course. We never reported that they were. The piece merely notes that, according to multiple sources, the alleged madam boasted of a such a relationship on surveillance audio. Whether she was being truthful or not remains in question. 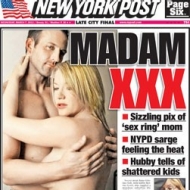