“It’s kind of like being in a David Lynch movie,” Jeff Ragsdale told The Observer over the phone. “Half of the calls I get are blocked, so I never know who I’m going to get on the other end.” Six months ago, Mr. Ragsdale started hanging up fliers around New York City, inviting people to call him. 65,000 people did so (including text messages).

Two days ago, The New York Post noticed and did a short profile on Mr. Ragsdale experiment. Since then, Mr. Ragsdale, who said he’s been battling loneliness and depression all his life and started the fliers after a painful breakup,  has received another 3,000 calls/texts. (Don’t worry, he’s on a limitless phone plan.) That’s even more than when his note went viral on the front page of Reddit.

Oh, and he has a book coming out today.

The Seattle native answered our call on the first ring, and for several minutes made chit-chat about the weather before getting down to business. After all, he has other calls to answer, not to mention the party for his new book, released today under Amazon Publishing. Jeff One Lonely Guy is the first book to be published under Amazon’s New York arm.

“Three months ago I started collecting data,” Mr. Ragsdale said about the book’s genesis. “When I was at the University of Washington, I studied with David Shields, a really great writer. I would send him some of these texts people were sending me, or jotting down what they said, and we compiled them.” His first reading tonight is at CultureFix, courtesy of Flavorpill.

He has fans in high places as well. On his website, JeffOneLonelyGuy.com, the first quote is from author Bret Easton Ellis:

The symphony of voices here is an overwhelming reading experience. This short book is also a verification of a legitimate new form of narrative; it’s the definitive document so far of where our medium is heading. I’ve never read anything like it.

This is not the first time Mr. Ragsdale has made a public bid for attention. The New York Post described him as a comedian and actor, though Mr. Ragsdale told The Observer he’s been doing odd jobs–including working in a Midtown office–to make money. In 2010 he stood on a street corner holding a sign that said “I was verbally abusive. I’m sorry, Megan.”

The New York Times’ City Room blog took a picture and then retracted the story, calling it a hoax. Mr. Ragsdale claims it wasn’t. “I suffer from a lot of anger issues.My girlfriend at the time, Megan Brady…she’s a performer too…dared me to stand outside wearing that sign after a fight. It wasn’t a hoax…the whole New York Times’ thing happened because one of their writers took a picture of me.”

Mr. Ragsdale also worked to bring down The Falls bar in 2006 after the murder of Imette St. Guillen, holding vigils outside the bar till it was shuttered for serving underage patrons.

“The Dorrian family was definitely tied to Giuliani and the police,” Mr. Ragsdale said of the incident. “People have told me that I played a big part in making sure that case got the attention it needed and the bar was closed.”

Ultimately, Mr. Ragsdale does think he’s less lonely and more happy since the phone calls came in, though he admitted that it could be emotionally draining. “People call from all around the world with all sorts of problems,” he said.

One that caught our eye was from a Goldman Sachs trader, who called Mr. Ragsdale three months ago. “He rapped for a little while from his desk,” recalled the author. “He just wanted to talk about how everything was going, how the economy sucked and about the Occupy Wall Street protests. It did have this huge impact on the brokers, he said, even though they acted like it didn’t. Moral was completely down.”

“And then he asked an amazing question,” Mr. Ragsdale remembered. “He said ‘The telephone has been around for fifty years basically. Why has no one else every done your flier idea?” 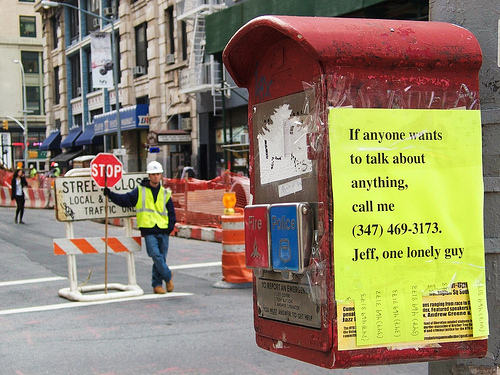