Massachusetts Senator John Kerry appeared at the New York Law School this afternoon as part of the Sidney Shainwald Public Interest Lecture Series and he delivered a speech “about where we find ourselves at this moment in our country.” Mr. Kerry began by apologizing for Congress’ dismal approval rating.

“I come to you with huge humility. I understand that we are at eight percent in the United States Congress and it is therefore miraculous that you would invite a sitting, elected member of the United States Senate to come talk to you,” Mr. Kerry said. “I don’t come here to be partisan, but I’m going to tell you facts.”

Despite his promise to be non-partisan, the Democratic senator proceeded to slam Republicans for “ideological extremism” in Congress, the failure of the debt reduction supercommittee and a presidential primary he described as a “traveling reality gong show television show.”

Mr. Kerry started his critique of the GOP by referencing the resignation of moderate Maine Republican Olympia Snowe, who announced her departure from the Senate this week due to her frustration with the lack of bipartisan compromise.

“Olympia Snowe, a terrific United States Senator was driven to the point of exhaustion with the process by a caucus and a process that demanded an orthodoxy of performance and belief that she simply was unwilling to kowtow to,” Senator Kerry said. “So, we’ve lost another moderate.”

Mr. Kerry went on to say he’s “fearful for our country” because “we’re mired in a moment” defined by “ideological extremism” and “our own fundamentalists.”

“We spend a lot of time talking about other countries, particularly the Middle East and places where there’s a lot of religious excessive demand,” Mr. Kerry said. “But here in our own country, we have our own fundamentalists and we have our own excesses of demand today, and expectation with respect to toeing the line.”

Because of this, Senator Kerry said the country must “think really carefully about where we’re heading.” He continued by citing “several exhibits” of how “we’re standing in our own way” including the GOP primary and the supercommittee failure, which he blamed on failure to compromise on the part of Congressional Republicans.

“We’re seeing a presidential race on the other side that is a traveling reality gong show television show, it’s bizarre,” Mr. Kerry said. “The leading candidate on their side has offered what for the economy of our country? A twenty percent tax cut.”

Senator Kerry cited his experience as a member of the debt reduction supercommittee to explain why he doesn’t believe tax cuts are the solution to the country’s economic woes. He said “the three groups” that have tried to tackle the nation’s debt–Simpson-Bowles Commission, the Domenici-Rivlin plan and the “bipartisan gang of six in the Senate” agree the government must come up with $2 trillion in additional revenues and mark $2 trillion in cuts. In spite of this need, Mr. Kerry said the Democrats on the supercommittee only initially sought $1.3 trillion in new tax revenue because they knew “the Republicans are in a tough place” because many of them signed Grover Norquist’s pledge not to raise taxes. Senator Kerry said this offer was “rejected within hours.”

When the deadline came for the supercommittee to reach an agreement, Senator Kerry said the Pennsylvania’s Republican Senator, Pat Toomey, “offered up $350 billion in revenue.” Mr. Kerry said he attempted to craft a compromise that would reach the minimum $1.2 trillion in budget reductions that was required to avoid the supercommittee’s failure. He said this deal fell apart because the Republicans “wanted the Bush tax cuts to be made permanent” for even “the upper one percent” of Americans.

After dramatically narrating his version of the supercommittee failure, Senator Kerry summed up his remarks by blaming Republicans’ desire to defeat the Democrats for governmental gridlock.

“Why are we stuck? Why is this the way it is? Why does Olympia Snowe leave? Why are we gridlocked?” he asked rhetorically. “Well, I’ll tell you in very simple terms; certain people in the leadership of the United States Congress have made a decision that their primary objective is not fixing the economy, it is defeating this president. And they have decided to do everything possible to gridlock everything in order that we all look bad and then people throw everybody out and they’ll come into power.”

Mr. Kerry finished by making his opinion of this “obstructionist” approach painstakingly clear.

“It’s the most depressingly small minded, venal unpatriotic thing I’ve ever seen in my life,” he said. 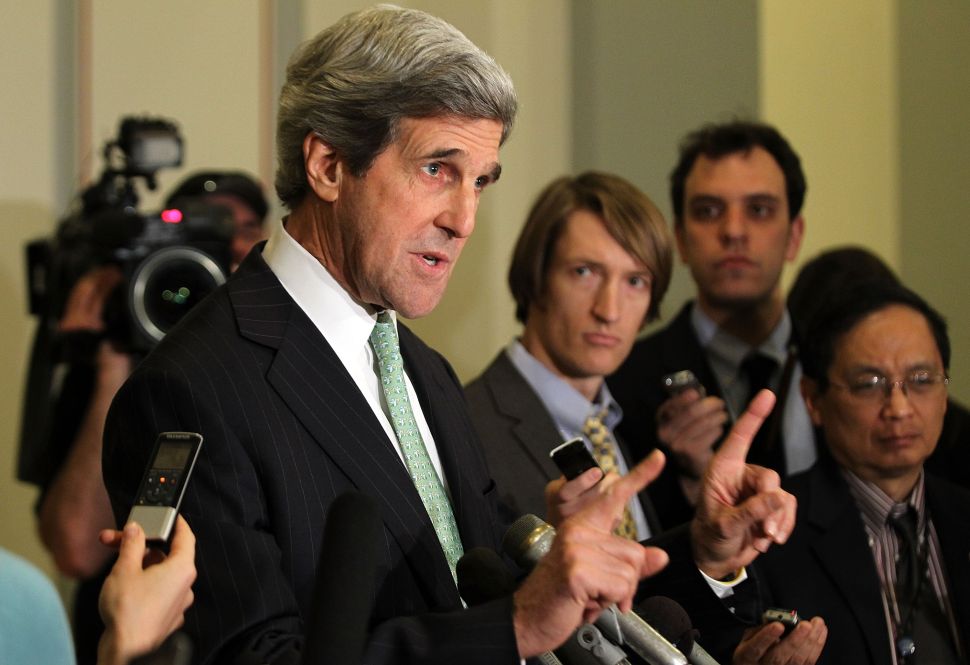