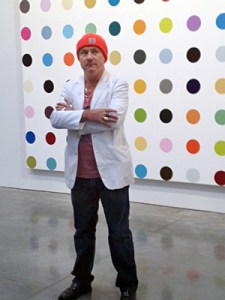 Damien Hirst, whose mid-career retrospective opens soon at the Tate, told The Guardian that he hopes to open his own gallery by 2014. He called it his “Saatchi Gallery.”

According to the artist:

“It’s about as big as the Whitechapel – six galleries, a café and a shop – and it’s a place to show my collection of contemporary art. It feels bad having it all in crates. It’s basically Bacon and beyond.”

He said he has five works by Francis Bacon, as well as work by Jeff Koons, Sarah Lucas, Banksy and others. The space, which almost sounds fictional given the artist’s usual antics, already has a designer, Caruso St. John.

We personally can’t help but wonder if the café will be serving shark.