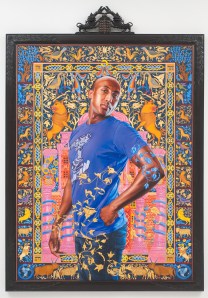 The artist Kehinde Wiley does a lot of things. Later this week he opens “The World Stage: Israel,” a 15-painting show at the Jewish Museum that brings his Old Masters lens to the night club denizens of Jerusalem and Tel Aviv. His first major show with his new gallery, Sean Kelly, opens in May, and he’s just done a career-spanning monograph with Rizzoli—all this in addition to doing a portrait for the cover of the new Santigold album.

He also does a solid impression of his former New York dealer Jeffrey Deitch. When The Observer told Mr. Wiley we were going to reach out to Mr. Deitch for this piece, he jumped into it, hunching his shoulders to make himself shorter in his chair at his Soho apartment Monday. “So, so, so,” he said in a low, nasally voice, squinting to imply that the forthcoming flattery should be taken very seriously. “Kehinde’s doing fantastically.”

Mr. Wiley now operates three studios around the world, one in New York, one in Beijing, where he keeps two Italian greyhounds in addition to the three he keeps here, and another in Dakar. He’s planning a fourth in the jungles of the Dominican Republic large enough to accommodate six other artists. The idea, he said, is to create a place where he can invite his artist friends. “I want to be able to ask them, ‘Hey, want to go paint in the middle of nowhere?’” he said.

“The World Stage: Israel” is the fifth installment in a global project that has him had finding portrait models, invariably young men, on the streets of India and Sri Lanka, Brazil, China, and Lagos and Dakar, then painting them in the classic style once reserved for wealthy patrons. The series’ intricate backgrounds swirl with cartoonlike flowers that creep onto a subject’s tank-top or, in the case of Hamza El Essawi at the Jewish Museum (nicknamed “Big Boy” by Mr. Wiley, he said as we flipped through the catalogue—they all have nicknames; another subject, “Montel,” is a dead ringer for the talk-show host), vines that foreground so lushly it looks like the alligator on his Lacoste shirt might leap off into them.

The paintings in the show are accompanied by Judaica from the museum’s collection selected by Mr. Wiley himself and reminiscent of the ceremonial Jewish papercut style seen in the backgrounds of the Israel paintings. Torah ark coverings lie in cases inside each room and, next to Mr. Wiley’s paintings, their purple satin and gold threads almost seem to display a similar MTV gaudiness. His radiant subjects aim to portray Israel as a melting pot—one featured subject is Kalkidan Mashasha, an Ethiopian Jewish rapper.

The theme of assimilation has always played a role in Mr. Wiley’s work—his subjects are frequently swaddled in the international brands of corporate cool—but never more so than in the “World Stage” series. His subjects’ poses, no longer tied to vamping on specific works by Ingres or El Greco (“They’re all up here,” Mr. Wiley said, tapping his head), are now more of a pastiche of classic painting, so elements of Brazilian posture are echoed in China and Israel. This brings him full circle, in a way, since his earlier works drew attention to how similar the poses in Old Master paintings are to the primping you see on the covers of magazines like Vibe and, in their reference to a sentiment rather than a body position, his new poses are closer than ever to the magazine version.

“I think you have to allow your style to evolve slowly over time,” Mr. Wiley said. “There are no major rips in the fabric, necessarily; there’s the slow departure from one habit to another.”

Mr. Wiley grew up in South Central Los Angeles, one of six children raised by a single mother who encouraged Kehinde and his brother Taiwo to take art classes at a local college, to keep them out of trouble, though it’s difficult to imagine a man whose apartment now features a stuffed albino peacock ever had the possibility of going that way. From there it was the San Francisco Art Institute and an MFA at Yale, where he quickly made a name for himself with portraits of African Americans with hair styles so impossibly large they devolved into abstraction. After graduation he was offered a fellowship at the Studio Museum of Harlem, which was where Mr. Deitch met him and offered him a show.

Mr. Deitch, now director of the Museum of Contemporary Los Angeles, said he was drawn to Mr. Wiley’s technical skill as a painter, and his eye for irony.

“He has something else that many of the best artists have,” Mr. Deitch said, “and that’s the aesthetic issues that are so strong they’re embodied in his own persona as well as the work. So you have that with Andy Warhol, Jeff Koons, Keith Haring—they actually embody the work, and there’s a world that they create around the actual paintings.”

For one opening at Deitch, Mr. Wiley wanted an 80-person high-stepping band to perform in the street outside gallery. He held an opening party for an exhibit at the Studio Museum at a vogue hall in association with the House of Extravaganza. “We could have done a whole book documenting all of these performance events that Kehinde created around his exhibitions,” Mr. Deitch said.

“I’m not one of those artists who fetishizes being socially maladroit,” Mr. Wiley said. At one of the photo shoots for “The World Stage: Israel,” his hosts slaughtered a lamb and everything went Middle East house party in a hurry.

It’s this rich social life—he’s famous for his fish fry-ups at Art Basel Miami—and the subtle details in his large works that have led him to hire assistants who aid in his painting. He doesn’t put out a want ad, he said. Rather, he asks friends if they know anyone who’d like to help on his more ambitious fare, like “Down,” his last show at Deitch that had hooded Harlemites in Renaissance death throes. That show probably had between five or eight assistants, he said. “The World Stage Israel,” being relatively smaller, required fewer.

“The last major show I did had paintings about 20 feet in length. That was a huge undertaking—there were all these little tiny flowers,” he said. “This is sort of à la Rubens, à la Titian—anyone who’s made any sort of great artistic effort has had a studio that is affiliated with assistants.”

Mr. Wiley enjoys the healthy market you’d expect from someone who makes large, colorful Pop paintings that aren’t that difficult to understand but may be more subversive than the people handing over $80,000 for them at auction (his average recent price, according to Artnet) realize. His auction record, achieved at Phillips de Pury & Co. last September, is $122,500; and a portrait from “The World Stage: Beijing,” Learn From Comrade Wang Guofu! (2007), ranks number two, $116,030 at Phillips’ London branch in 2010.

Next up, Mr. Wiley said at his apartment, is a project with the Louvre that has him using the museum’s collection as inspiration for a series about the former French colonies. For it, he’ll travel to Tunisia, Algeria and down into the Congo. Africa from the point of view of the colonizers? Isn’t that a little … ?

“Fucked up?” he asked. “Well, in order to come to terms with how we create stories and narratives, how we start talking about what it means to be a citizen of Cameroon—that nation didn’t even exist prior to colonial presence.”

He leaned forward in his chair as he described what he might explore there. “The only way that we talk about these nation states—and oftentimes there’s a lot of strife within these nation states, because they’re not naturally supposed to be together—is through the lens of the colonial project. What does that say about those nations? Are they all necessarily basket cases? What does that say about France in its desire to control and to annex? Sure it’s fucked up,” he leaned back. “That’s the way the world is.”