“My parents were small business owners for over 30 years,” said Kwon, who broke down toward the end of his testimony when he referred to his parents’ love of the New York Giants.

He noted their hard work and sacrifice. He said his father suffered a series of strokes, and his illness made it impossible for him to work.

That put the business responsibility on his mother’s shoulders.

“She handles all aspects of the business, making sure shelves are properly stocked,” Kwon said.

Kwon said his mother made cash deposits from cash generated from sales in the store in increments just under $10,000. The way she made the deposits could run her afoul of the Bank Secrecy Act.

The nominee said when she made the deposits, his mother did so in ignorance of the federal law.

“I explained to her that making deposits this way probably raised red flags,” said Kwon, who insisted she wasn’t trying to evade the feds.

Under questioning later by Senate Committee Chairman Nick Scutari (D-22), the nominee tried to explain why his mother made the deposits in such a manner.

“There was not a specific reason,” said Kwon. “This was a routine she had developed over the years. She was comfortable with this routine for different reasons, not one reason.”

State Sen. Nia Gill (D-34) later pursued the structuring question, trying to determine if Kwon’s mother knew about the limits imposed by the federal Currency Transaction Report (CTR).  Gill tried to get Kwon to admit that the pattern inferred some knowledge by the Kwons to avoid the filing mechanisms of the CTR.

“Based upon your knowledge… did you know the pattern of your mother’s deposits could be a potential violation?” Gill wanted to know.

“Did you tell your mother to go to an attorney?”

“You understood there was a situation where there could be a potential claim of a violation of the CTR?”

“Even though you didn’t have her go to an attorney… did you instruct either your wife or mother to write a letter to the bank just to have it on file? I made these deposits, but I didn’t know anything about the CTR. …As lawyers, when you see a problem, you make sure you have documentation to show your conduct prior was not intended to evade.”

“By the time I learned about it, by the time I had the discussion with my mother, we were about to close the account,” said Kwon.

“The account having closed at that point, it was more important to me that she simply stop doing that because there was no purpose in her doing that.”

Gill later established that Kwon changed attorneys after he found out he might be a candidate for the Supreme Court last July.

“My mother was dissatisfied with the attorney,” the nominee explained.

Scutari later kept on the nominee.

“Why would she ever come up with this figure?” he wanted to know.

“That’s a question I have asked since the moment I found out about this,” Kwon said. “No one, including the banks, ever told her about this CTR fund. When I told her about it, she stopped.”

Following his opening statement, Kwon choked up talking about his parents, with whom he came to America at six years of age.

He emphasized his roots as a Korean immigrant and noted his experience at the U.S. Attorney’s Office as deputy chief of the criminal division, responsible for 35 criminal prosecutions.

“It is a testament to the openness and fairness of the people of this great nation,” said Kwon, who made $139,000 annually in his U.S. Attorney’s Office job and $150,000 per year at the Attorney General’s Office. 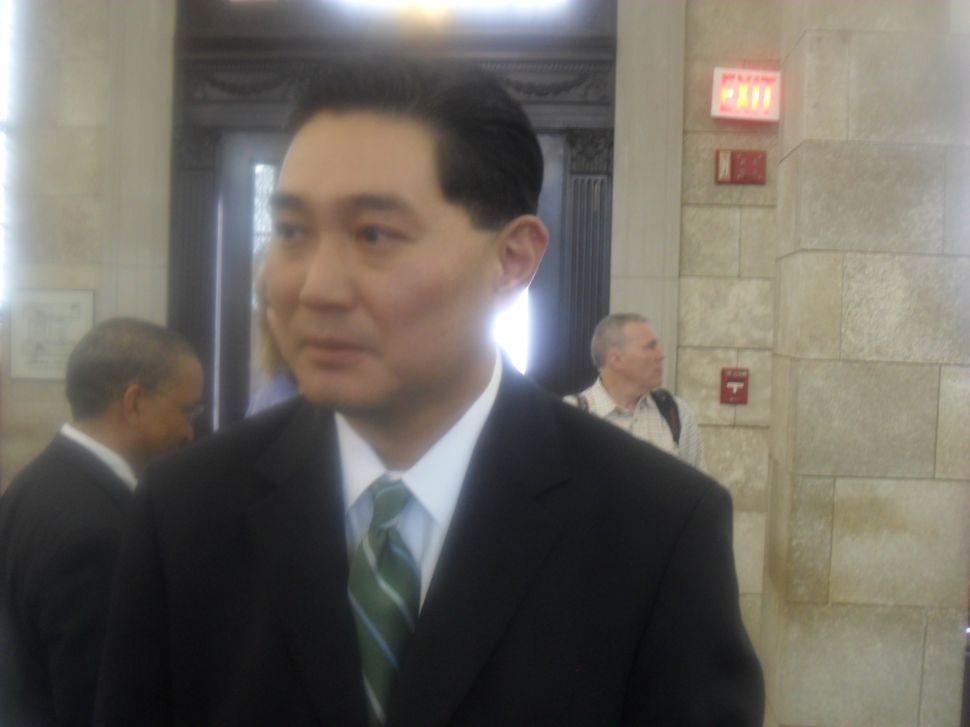