Lautenberg is skeptical about the deal and said so in a letter Monday to federal Secretary of Education Arne Duncan.

“The senator stands with the people of South Jersey who are questioning the wisdom of this back-room deal, not a political boss seeking to expand his influence,” Lautenberg Spokesman Caley Gray said earlier today.

“It’s sad that elected officials will simply fall in line on orders from their political benefactor when so many South Jerseyans are alarmed by this deal. Instead of attacking Senator Lautenberg, these politicians should be joining the senator in demanding answers from Governor Christie about the effect this deal will have on student costs, jobs, and the financial health of our state colleges.”

While Norcross sees potential to make Cooper a regional research foundation, the senator worries that a Rowan muscle-up would be little more than an opportunity for Norcross to relieve debt at Cooper Hospital, where the South Jersey power broker chairs the board.

Norcross hit back this afternoon in a statement.

“I think Senator Lautenberg has been a phenomenal representative for northern New Jersey,” said the South Jersey Democrat.

“But on this issue, rather than taking cheap shots like a typical Washington politician, the Senator should be rolling up his sleeves and be part of a solution for a higher education model that strengthens Rutgers, Rowan, Newark and our region. Camden is not in the State of Maine, it’s in New Jersey and desperately needs the Senator’s help, not his hysteria. We should all be embarrassed that New Jersey ranks third to last in the United States on higher education funding. Rather than provoking a political food fight on this, let’s focus our efforts on fixing that disgusting blemish & improving higher education in our State and region.”

Lautenberg and Norcross have had a strained relationship going back at least to 2008 when the Norcross-backed U.S. Rep. Rob Andrews ran unsuccessfully against the incumbent senator.

By day’s end, the Christie administration reiterated its support for the deal to strip the Rutgers banner and replace it with Rowan.

“The intention of the merger plan is to create medical and research centers of excellence in north, central and south Jersey that can compete with, even eclipse other education institutions competing for research dollars, prestige, top educators and top students,” said Christie Press Secretary Michael Drewniak.

“From his letter, it looks like Senator Lautenberg has chosen not to be a positive participant in strengthening New Jersey’s higher education institutions. Instead he’s engaged in this peculiar, over-the-top correspondence full of unsupported innuendo and political vindictiveness. It’s also odd that Senator Lautenberg, who is generally absent from higher education issues in New Jersey, is parachuting in now in this way.”

Gray said Lautenberg raised questions about the deal on February 22 in a letter to the governor, but Christie did not respond. 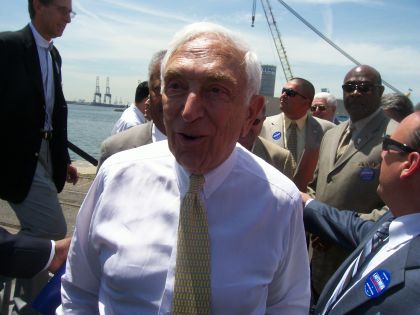