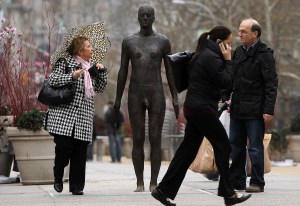 Since 2004, the park has hosted a number of ambitious installations from artist like Mark di Suvero and Sol LeWitt and though it’s hardly the first park to mount such exhibitions, it will be among the first New York parks to have a curator position. (Update, 10:50 p.m.: An earlier version of this post stated that Madison Square Park is the first New York park to have a curator. However, a reader noted that Cecilia Alemani serves as curator of the High Line park in the Meatpacking District and Chelsea. Gallerist regrets the error.)

President of the Madison Square Park Conservancy Debbie Landau said that fund-raising is well under way for the endowment.

“It came about out of our reference and respect for Martin Friedman,” she said of the new position. “He’s considered the father of the outdoor art center and we wanted to do something special to mark our admiration of him.”