A day before he planned to launch, Jim McQueeny decided against running for congress in the 5th congressional district, citing work demands.

“It is with much regret and great sadness that I must withdraw my name from consideration for the Democratic nomination in the 5th Congressional District,” McQueeny said in a statement.

“I have always believed that service is the ultimate responsibility and I embraced the opportunity to represent my community in Washington. However, the suddenness of the opportunity, with events propelled further by the enthusiastic response to it, just didn’t allow for the proper time for me and my business partners to transition the work of our company’s customers; locally, nationally and internationally,” added the public relations executive and News 12 Power and Politics host.

“Many of the projects had been started, or committed to, with the expectation of my personal, direct involvement. Being a candidate for office would have precluded me from fulfilling those pledges and I can not in good conscience neglect my professional responsibilities.” 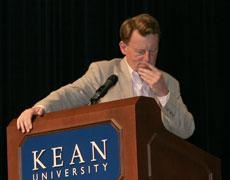