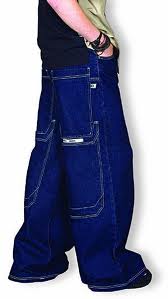 Landscape architect Ken Smith designed the award-winning rooftop garden for the Museum of Modern Art’s Yoshio Taniguchi (photos available at that last link) in 2009 and in a recent interview said that inspiration for that project came from a simple, if curious place. The Iowa State University alumnus told the Iowa State Daily that the gardens are designed to resemble a pair of “skateboarder’s pants.”

To quote that story:

As for the exact inspiration, he found it from a pair of skateboarder’s pants that his wife bought, using them to help him design.

Neighbors who have the view of the garden did not like the rooftop, and they did not want to see the old design.

“The neighbors didn’t want to see the roof, and I used a camouflage pattern design to hide it, which is funny,” Smith said. The skateboarder’s pants and camouflage design were not the first ideas in Smith’s mind for the rooftop.

“I had an idea of those spinning daisies that used to be in front lawns, thousands of those,” Smith said. “That idea didn’t get approved.”

While we may never know exactly what “skateboarder’s pants” are, or how they came to inspire a something completely unrelated to clothing, it’s nice to know that MoMA is always willing to take risks, even when it comes to landscaping.