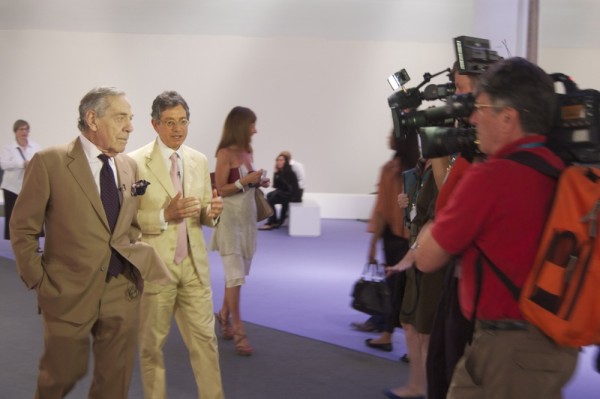 The last time that journalist Morley Safer filmed a segment for the CBS newsmagazine 60 Minutes about the contemporary art world, back in 1993, Marc Glimcher, president of the Pace Gallery, declared that it “stank of anti-intellectualism.” Mr. Safer had quipped that much of today’s art was “worthless junk,” among other bon mots. It was quite a takedown.

Now Mr. Safer is returning for a sequel on 60 Minutes, which will air on Sunday. Yes, on April Fools’ Day.

“I was accused of being a philistine, someone lacking the aesthetic sensibility to appreciate these masterworks,” Mr. Safer declares in a short preview of the episode, as he examines art at the 2011 edition of Art Basel Miami Beach. (Fair enough, but he looks really happy posing under that whimsical Erwin Wurm sculpture of a huge police cap!)

Jeffrey Deitch, director of the Los Angeles Museum of Contemporary Art, makes an appearance in the preview. (We spotted him walking with Mr. Safer at Miami Basel.) “It was almost a send-up of the contemporary art market,” Mr. Deitch tells the television journalist with a big smile, of that old episode, and adds that Jeff Koons, whose work was selling for around $250,000 in 1993, has now had pieces go for $25 million auction.

No doubt Mr. Safer will attempt to rile some people on Sunday. Nevertheless, we’re looking forward to it. When was the last time you saw a Sarah Braman sculpture on network television? You can on Sunday. Plus, you can see Tim Blum and no doubt a bevy of other luminaries. Let’s end with some words of wisdom on Mr. Safer’s original art-world satire from the critic David Hickey:

“It was wrong-headed, ignorant, and ill-informed about art, as well, but if these afflictions disqualified folks from commentary, more than half the art community itself would be stricken mute. So I was cool with Safer’s jibes. It’s a free country and all like that, and who the hell watches 60 Minutes, anyway, unless they’re stranded in a motel out by the highway in the middle of America?”