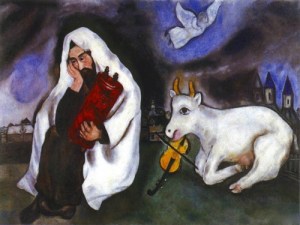 Bank of America will fund the restoration of the Tel Aviv Museum of Art’s Marc Chagall paintings. [Bloomberg]

The LACMA rock, a 340-ton rock that is traveling across Southern California to the museum, is doing just fine. [LA Times]

After a tour of Japan, Vermeer’s Woman in Blue is restored to its original colors and will be on view at the Rijksmuseum starting March 30. [The Art Newspaper]

Jonathan Jones tells museums in the U.K. to tone down their rhetoric about “saving” works of art when they are set to be sold outside of the nation. “Save people,” he writes. “Enjoy art.” [Guardian]

Ralph McQuarrie, the artist who helped create many of the storyboards and visuals for Star Wars, is dead. [NYT]

The DeCordova Sculpture Park and Museum in Lincoln, Mass., has hired Julie Bernson as its first deputy director of learning and engagement. [ArtDaily]

A tribute to Ken Price. [WSJ]

Gilbert and George have begun a crazy interview circuit for their new show at White Cube. [Art Market Monitor]