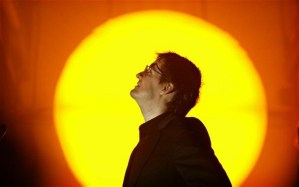 Jonathan Jones says he is “entirely humbled” by the Internet, complains about it. [Guardian]

Sara Driver, the subject of a retrospective at Anthology Film Archives, reminisces about the Bowery (when it was cool). [WSJ]

A sequence of embroideries hanging at the Tate plots the end of the Cold War. [Bloomberg]

The Studio in a School gallery is displaying work by New York City public school students in Midtown. [Schoolbook]

The Orange County Museum of Art will organize a retrospective of Minimalist John McLaughlin. Christopher Knight compares the artist’s work to that of the Mono-ha artists of postwar Japan. [LAT]

Members of the Eisenhower Family are not impressed with the Gehry’s design for an Eisenhower Memorial. [Chicago Tribune]

Here’s an interview with Museo del Barrio curator Rocío Aranda-Alvarado: You have to make them interested, make them want to learn more and acknowledge the importance of whatever it is they just saw.” [NYDN]

An exhibition dedicated to Olafur Eliasson will open the Louis Vuitton Museum in Paris, which opens late 2013. [The ArtsNewspaper]