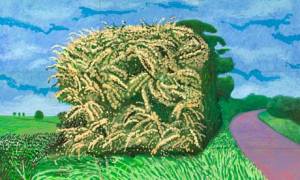 A detail from The Big Hawthorn, 2008, by David Hockney. Photograph: Richard Schmidt

Ian Jack wonders if it is a problem that David Hockney’s blossoms look like “evil yellow slugs.” [Guardian UK]

Georgina Adam on the ongoing controversy involving a Rauschenberg, a stuffed eagle and the IRS. [Financial Times]

Sotheby’s will sell Gunter Sachs’s collection of art and design in London in May. Mr. Sachs was once married to Brigitte Bardot! [Bloomberg]

Riding with the rock: how transport of the Levitated Mass sculpture took over one journalist’s life. [LA Times]

Matthew Yglesias has a good and humorous piece on Louis Vuitton’s campaign against free speech. [Slate via Art Law Blog]

The Wall Street Journal gets around to reviewing James Rosenquist’s F-111 at MoMA. [WSJ]

In case you missed it this weekend: a brief history of Knoedler Gallery. [NYT]