The N.Y.P.D. was holding back regarding Occupy Wall Street protest actions on Saturday night until they put the smackdown on a band of European bagpipe players in nothing flat. The pipers showed around 11 p.m. and began playing for the assembly, but within 5 to 10 minutes they had been arrested, resulting in a sharp rise in tension in the crowd.

Bagpipers just started marching into the park bringing the party mood with them, NYPD arrested one of them, and things got real heated. #OWS

As police led the musicians away, the crowd chanted, “One more song!” The @NewYorkist Twitter feed reported the bagpipers were French musicians who had participated in a St. Patrick’s Day parade earlier in the day.

Authorities began mobilizing in force to evict protesters and close Zuccotti Park after the bagpipers were taken away. Many protesters passively resisted by linking arms and sitting but mass arrests ensued. 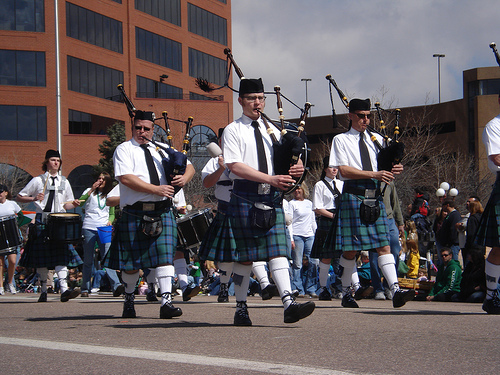