NEWARK – One by one at the lectern here in the Metropolitan Baptist Church, the Payne Family remembered U.S. Rep. Donald Payne (D-10).

The congressman’s older brother and lifelong protector Bill Payne fought off the tears.

“I have a difficult time referring to my brother in the past tense,” he said.

“We grew up in poverty; we didn’t have tissues we just went like this,” Payne said, wiping his eyes with his hand.

The Paynes’ mother died when she was 30. The brothers lived with their grandparents.

Their father died on the same date that Donald Payne died.

Daughter Wanda Payne said, “He was like a mother and a father to me. My mother passed away (in 1963), and he always encouraged me to do whatever I wanted to do. I am a pre-k teacher and I am very happy with what I do.”

Daughter Nicole said, “I was utterly moved and compelled to tears as people came and visited and thanked him for all his works. As I read the cards and the people thanked him for turning on their heat, their lights, and getting them food stamps, he was their advocate. …He was passionate about compassion.”

Yvonne Payne, the congressman’s sister, now of California, said her brother told her when they visited President Barack Obama, ‘this might be your last time to the White House.”

Ms. Payne said she thought her brother meant that Obama might not be in the White House for a second term.

But she knows now the comment reflected her brother’s sense of his own mortality.

“I’m honored and priviliged to have gone and taken this picture with him and the president,” she said, then addressed former President Bill Clinton in the front row.

“I have one of you (a picture), Mr. Clinton, and I’m glad you remembered my name because a lot of people don’t remember my name. I thought I would cry up here, but I feel great.”

The crowd rose to its feet.

He could sit with the freedom fighter and the president of the country and be respected by both, said her son, former Assemblyman Craig Stanley.

“Let your hearts not be troubled,” Payne told the crowd.

“Thank God for my mother for having such great taste,” he said to applause, reflecting on his late mother Hazel Johnson.

“I want everybody to be happy,” Payne added. “I’m at peace. On March 6th I found the strength that I didn’t know I had. We all talk about the man today. But no man is perfect. Donald Payne the congressman had flaws. He bit his nails. He hoarded newspapers. He made me take his garbage out and I live next door. So no, the man was not perfect.”

He thanked everyone for the outpouring of love shown to his father, who he described as a simple man with complicated issues.

He thanked the members of the congressman’s staff.

He radiated peace through his grief.

“I’m at peace,” Payne acknowledged. “Just think of the things that he did for us, without ever asking for anything back. He wanted us to understand that no man had station above any other man.” 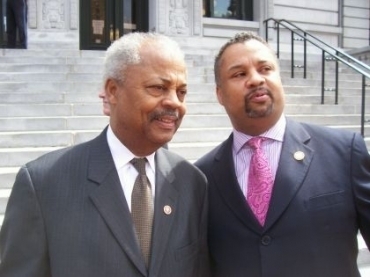