Approximately 200 protesters affiliated with the Occupy Wall Street movement showed up to protest a Mitt Romney fundraiser at the Waldorf Astoria today. Aaron Black, an Occupy Wall Street organizer, said he wanted to demonstrate against the influence of money in politics.

“it was an auction happening in our city right under our noses–$2,500 a plate. Our government is not for sale,” Mr. Black told The Politicker. “This is the root of all evil corporations are not people.”

Protesters gathered about a block from the hotel where they were treated to a sermon by well-known local activist Reverend Billy Talen and his Stop Shopping Choir. Mr. Talen echoed the theme money is having a corrupt influence on American politics.

“Hallelujah! We are the 99 percent!” Mr. Talen said. “The corruption of our elected officials makes it impossible to do anything about homelessness, foreclosures and evictions … the illegal wars, the climate change.”

In the crowd, protesters carried signs identifying Mr. Romney as “100 percent out of touch” and “Mr. One Percent.” A contingent from United New York carried a banner supporting the DREAM Act and signs reading, “Veto Romney, Not The Dream Act.” We also spotted Councilman Ydanis Rodriguez, a longtime supporter of the Occupy movement who was arrested during the eviction of the demonstrators from their original headquarters in Zuccotti Park last November.

“I will continue being part of any initiative that the Occupy movement is involved in,” Mr. Rodriguez said. “Being here today is very important. We are here today raising a voice against Romney who has a record of destroying jobs. He has a record against immigrants.”

The demonstrators marched around the hotel surrounded by a heavy police and Secret Service presence. However, the heavy security might not have been entirely due to Mr. Romney and the protesters. Former President George W. Bush is scheduled to speak at the Waldorf Astoria tomorrow night at the annual dinner of the Drug Chemical and Associated Technologies Association. Romney campaign spokesman Eric Fehrnstrom said there was “no meeting” between Mr. Romney and Mr. Bush.

Inside the hotel lobby, we spotted a single protester wearing a suit and carrying a sign that said, “Mitt Romney bought my vote.” We also saw a woman asking hotel staff for directions to Mr. Romney’s event. She told us she was a Romney donor and declined to give her name, but she was willing to share her thoughts on the state of the campaign for the Republican nomination.

“I’m not giving my name. What do I think about the race? The Republicans are their own worst enemy,” she said before walking away.

As of this writing, the protesters are continuing to demonstrate across the street from the Waldorf. 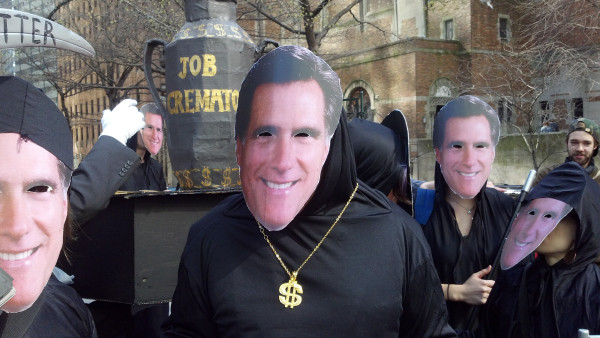