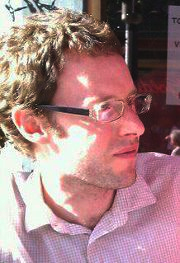 Roger White, an artist and an editor at the art journal Paper Monument, has sold an untitled book about contemporary art from the last 25 years to Bloomsbury. It was acquired by Rachel Mannheimer for publication in the U.S. and U.K. through Mr. White’s agent, Edward Orloff at McCormick & Williams. In an interview, Mr. White described the book as a “collection of interrelated essays about artists who probably will be on the less established end of the scale, as far as visibility.”

A statement from Bloomsbury says the book will be “told from the perspective of aspiring artists at the very beginning of their careers, as they work to define themselves in an era when literally anything can be considered art.”

“It’s much more my peer group,” Mr. White said. “I think that’s where contemporary art is at its most vital.”

This is Mr. White’s first book, though with Paper Monument he did publish the excellent anthology, I Like Your Work: Art and Etiquette, which included contributions from 38 artists, critics, curators and dealers (Mr. White wrote about “How Artists Must Dress”). He works in the medium of painting when he isn’t writing and is represented by the Rachel Uffner Gallery on the Lower East Side.