Following a raucous three hour meeting that felt at times like a botany lecture and a carnival sideshow, replete with boos and cheers, the city’s Public Design Commission voted unanimously in favor or remaking a five-block-long section of the iconic Riegelmann Boardwalk in Coney Island out of concrete and plastic rather than wood.

More than 50 community members turned out to decry the plan, with all but two of them opposing it for myriad reasons, from the historical to the aesthetic to the kinesthetic. After enduring hours of angry testimony, the commission considered a number of the community’s complaints, challenging the Parks Department to relocate the concrete swath set to run through the middle of the boardwalk, moving it away from the beach and closer to the land, as well as pressuring the department to include wood alternatives in other sections of what was deemed a pilot program for the eventual transformation of the entire 2.5 mile wooden way.

But in the end, the commissioners conditionally approved the plan 6-0, so long as these alternatives are explored by Parks. Based on the uncertainty over these alternatives, Parks Department officials were vague on how soon they would be installing the new section of boardwalk, at the Eastern-most end, and whether it would be in by the summer or not.

The commissioners asked hard questions of the Park Department at the end of the hearing, but the crowd would shout them down with their own take at times. Byron Kim, who asked by far the most questions, on everything from sourcing good wood to the width of the concrete at one point turned around and asked for quiet. “Would you please stop, we’re trying to help you out,” he said.

In the end, the angry crowd still felt defeated. Two separate women cried on the way out of the hearing room. Another shouted, “For shame!” when the somewhat-more-favorable-than-expected vote was taken.

“They changed their story every time,” Todd Dobrin said of the Park Department. He grew up in Coney Island and formed Friends of the Boardwalk after he says he was kicked off the local community board for opposing the new proposal. “First they said it was for the emergency vehicle, and we showed they could go on the wood. Then it was about slippage, and we said, ‘What about the snow and ice, which can’t drain off the concrete?’ Then they come up with cost. We said, ‘What about paying to remove all the ice and snow and to maintain the concrete?’ Then they said they couldn’t find the supplies, so we brought in three different suppliers.”

Indeed, two separate wood suppliers attended the hearing today, one from Allegheny Wood Products all the way in West Virginia. Obviously, Michael Caruso had an economic stake in convincing the Parks Department and the Public Design Commission that he could provide for their lumber needs, though his very presence also seemed to rebut the claim that the city would be unable to procure the amount and quality of wood it needed. Indeed the commissioners insisted on the inclusion of some wood products in the new section of the boardwalk, to test it against the concrete and plastic alternative.

The city claimed that the concrete and plastic approach was the most cost effective, though its justification for concrete, and not just plastic planks, never quite satisfied either locals or the commissioners.

Wood was much the reason this renovation was being undertaken. Five years ago, as part of PlaNYC, the administration committed to no longer using tropically sourced hardwoods in its projects, which tend to last longer than most domestic alternatives. This contributes to deforestation, however, as a chart presented by the Parks Department underscored—since the city moved to tropical hardwoods in 1975, it has used seven different kinds, starting with Greenheart, then Angelique, eventually Ippe and now Camaru. As each grew scarcer and more expensive, a new wood became required. Underscoring the challenge, the case was made that an area the size of Manhattan and Brooklyn would have to be logged to replace the same amount of boardwalk as the concrete and plastic proposal.

Caught at the center of this fight was Tim Keating of Rainforest Relief. He founded his group in the 1990s to combat the use of tropical woods, and since 1995 he had pushed the city to use recycled plastic planks on the boardwalk. But his wish came too true too long after, once the plan for concrete was implemented. Asked if he regretted the decision to go after the boardwalk he said no. “They’re not cutting down trees in the rainforest anymore,” he said. But he also had his regrets. “This makes it harder for us everytime we go out to the other boardwalks looking at what to do. We could have been a leader, but no one is going to follow New York’s lead on this.” 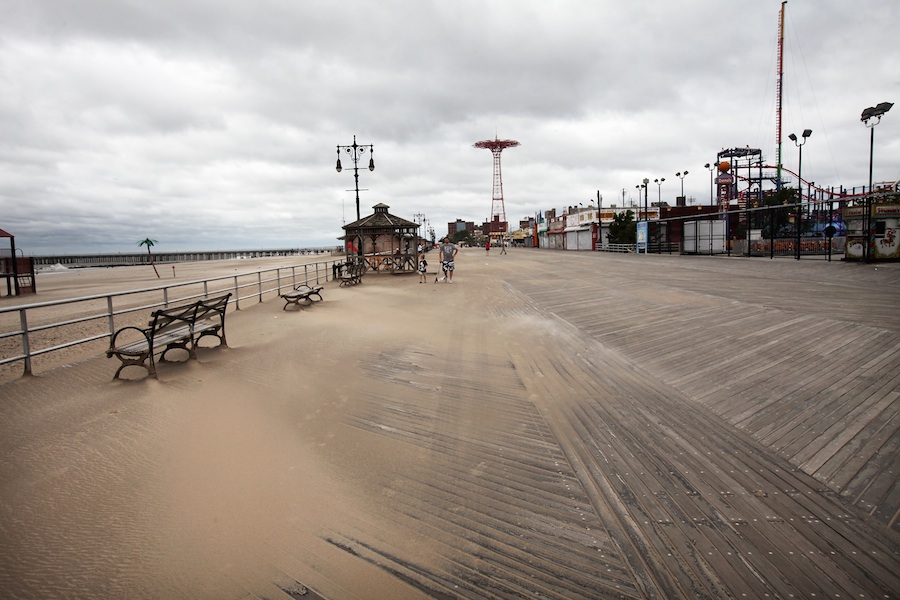 Filed Under: Real Estate, Coney Island, Sodom by the Sea