Queens Councilman Peter Vallone Jr. believes the new ABC series “GCB” is an “outrageous attack on the Christian faith” and he’s calling for a boycott. Mr. Vallone is incensed about the show because its original title was “Good Christian Bitches.”

“The title of the show alone is yet another outrageous attack on the Christian faith. Charlie Sheen will be back on ‘Two and a Half Men’ before we see a similar title targeting another religion,” Mr. Vallone said in a statement released this afternoon.

“GCB” is based on the book “Good Christian Bitches” by, Kim Gatlin. Due to concerns over the name of the book, ABC initially changed the show’s title to “Good Christian Belles” and eventually the abbreviation. ABC claims the “B” in the acronym still stands for “Belles.” This has not appeased Mr. Vallone.

“No one is fooled by that ridiculous claim. The original intent is clear, and changing the title of a show in your head doesn’t count,” he said.

Mr. Vallone’s statement called for “Christians and people of all faiths” to boycott the show. The councilman also posted about his dissatisfaction with “GCB” on his Facebook page last Sunday. In his Facebook note, Mr. Vallone accused Hollywood of regularly mocking Christians and expressed doubt a network would run a show with a title that was offensive towards another religion:

“so on this lenten sunday i’m reading a post column called ‘the joke’s on Jesus’ about a show called ‘GCB’ (short for Good Christian B*tches) in which the star, kristin chenoweth says ‘if you cant laugh at yourself you are taking life too seriously…’ The point isn’t that Christians cant laugh at themselves, the point is why is it always Christians the hollywood is laughing at?? We won’t hold our breath until we see a show with a title like this about some other religion..”

Though Mr. Vallone isn’t a stickler for political correctness, he clearly thinks “GCB” has crossed the line. 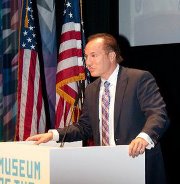