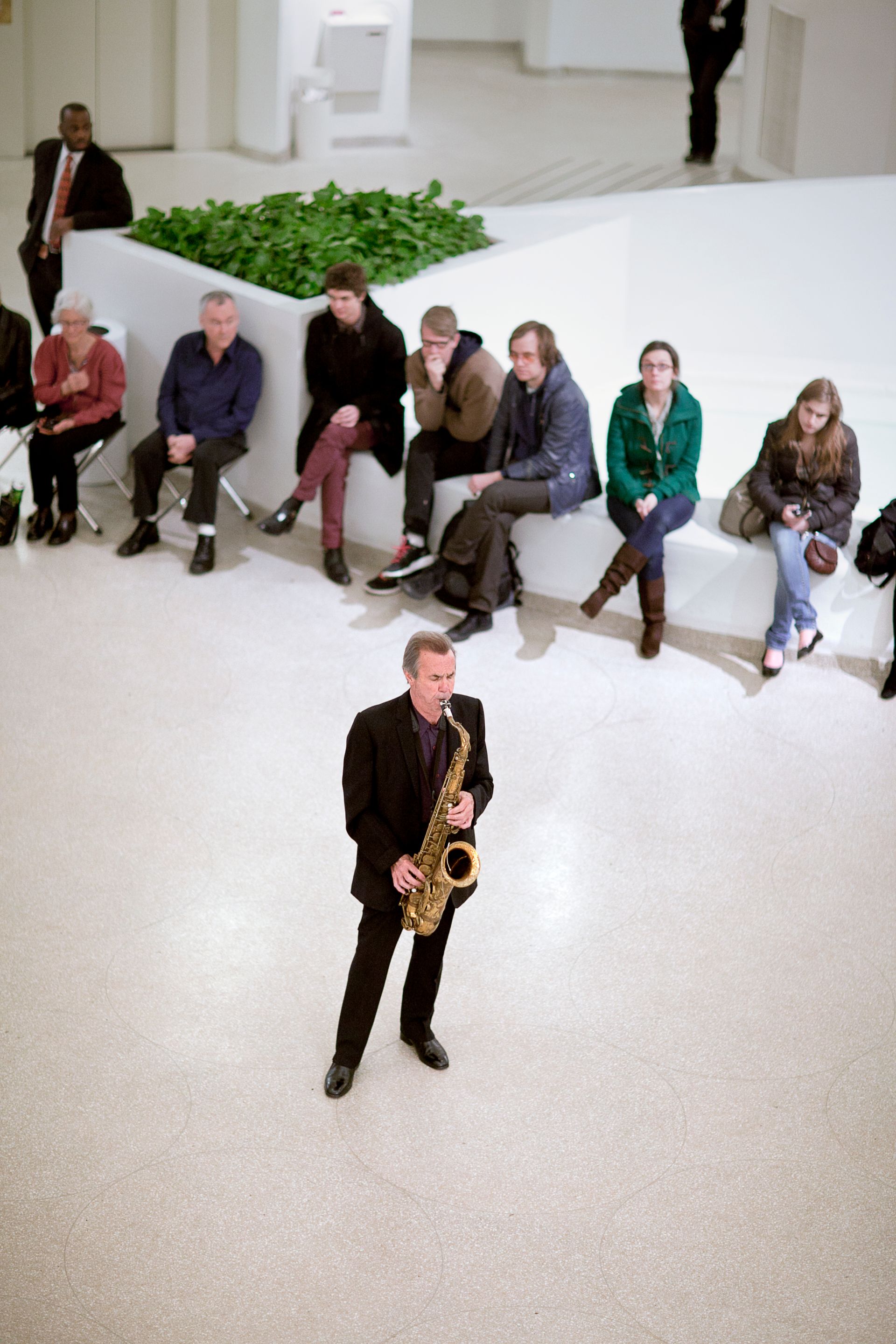 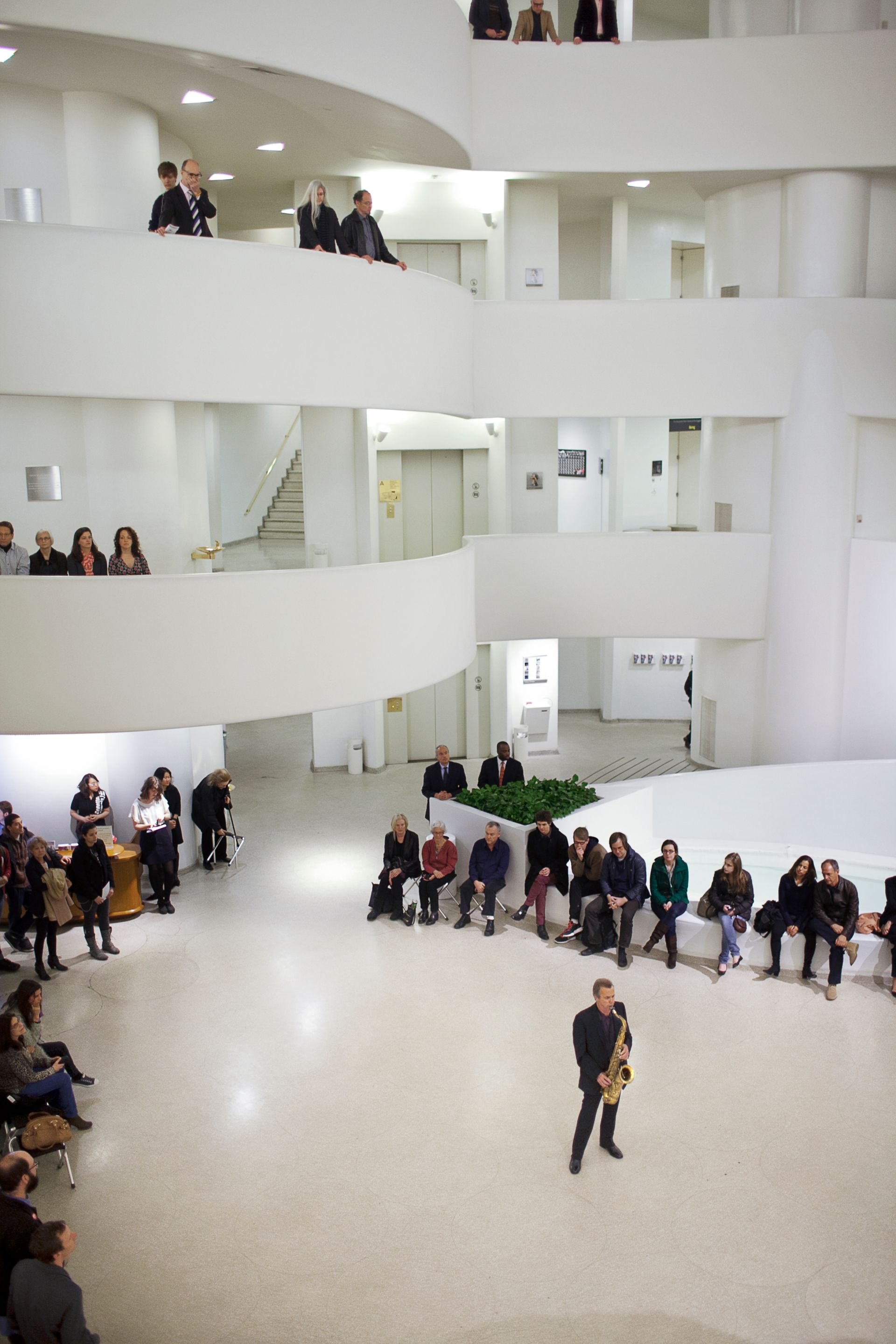 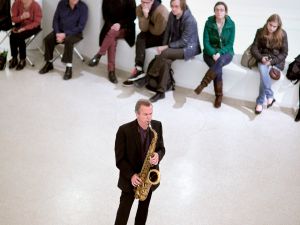 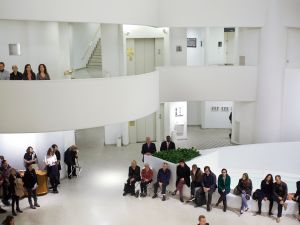 On his 1977 album Fifteen Saxophones Dickie Landry uses tape delays and overdubs to pile saxes and flutes on top of one another. It sounds like a whole scrum of musicians is involved, but it’s played by a single man.

Performing in the center of the Guggenheim’s rotunda on Monday night, Mr. Landry was once again by himself, and though he didn’t quite conjure a whole gang of musicians with his tenor, there were moments when it seemed like two, maybe three, saxes were at work. His long, flowing scales bounced from the ceiling overhead back down to the floor as he blew, almost uninterrupted–except for a quick breath here and there–for about an hour.

Mr. Landry was there to play SOLO, a tribute to the late artist John Chamberlain, who took up the saxophone at the age of 74, about a decade before he died. He played as he entered the rotunda from back by the museum’s elevators, and moved slowly over to stand next to Chamberlain’s tall silver sculpture SPHINXGRIN TWO (2010), which looks like two thick pieces of rope twisted together, their ends set on their feet to dance. Audience members lounged on mats, sat over by the museum’s small pool and arrayed themselves around the rotunda, walking about, examining the work as he played.

A former member of the Philip Glass Ensemble, Mr. Landry began by channeling its brand of cool, comfortable Minimalism, tilting his streams of notes toward dissonance but always safely resolving them.

He repeated passages with slight variations, and when he veered low, hitting the deepest notes hard, Frank Lloyd Wright’s museum really played along. It vibrated and echoed. A few times Mr. Landry almost started to swing, there was a hint of syncopation, but he reined that in, keeping things orderly, except when he let out high-pitched squeals from his reed, or metallic clicks from his instrument’s keys when he really let it rip.

After about half an hour, Mr. Landry set off toward the museum’s ramp, and after almost losing his balance at its start–“ha!” he exclaimed, pulling the sax from his mouth–he pushed himself forward, ambling up its slope, past Christophe de Menil and Lawrence Weiner, playing as he went. The sound bounced around the space as he walked, passing Chamberlain sculptures along the way, and suddenly crescendoed when it hit the architecture just right.

Stopping on the fourth floor, he faced out toward the rotunda as a gentleman summoned the elevator. It opened and he turned around to catch it, still playing as he slipped inside, the right door tapping him on the shoulder. The sax kept coming, though barely audible as he rode it to the ground floor, where he emerged to light laughter from the crowd.

He strolled back to his place at the center. There were a few more scales, a few more high-register screeches and then a bow. He motioned over to SPHINXGRIN TWO, a soloist thanking his conductor.