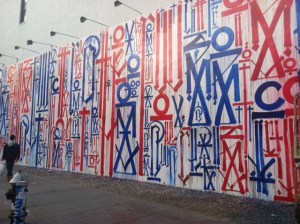 This week, the graffiti wall at Houston and Bowery was painted by Los Angeles artist Retna with a work entitled A Conversation With a Great Friend. With the help of two assistants, the new public artwork was completed on Monday. But the painting of the wall has coincided with the departure of a longtime resident of a spot on the same block, Billy’s Antiques & Props, which offers antique wares like school desks, wood-framed mirrors and signage from defunct gas stations that the store’s owner, Billy Leroy, would set up along the sidewalk on the north side of Houston Street along the tent that the shop occupies.

“Oh, I’m closing because I can’t take another cold winter, and the neighborhood has changed so much,” Mr. Leroy said. “Rag ‘n’ Bone. It’s not the old Bowery anymore. It’s just a drag.” Despite the Whole Foods and all the fancy retailers in the neighborhood, Mr. Leroy asserts that he is not leaving because his rent was being raised. “My landlord, Tony Goldman, has always been very fair with me. It’s just that I’m fifty-two years old. I don’t want to be sixty-two and sitting in a retail location with no heat or electric. But I’m always going to make deals. I’m Billy making deals.”

When the store opened in 1986, Mr. Leroy did business with the original owner of the space, Rob Fennick, when it was called Lot 76. He started working for Mr. Fennick in 1998 and took over in 2003.

But it’s not the same as it once was. “You know, if the Bowery was still the old Bowery with quirky shops in New York, and bums everywhere, my store would not be big. In fact, I’m the last one.” Mr. Leroy is tired of holding down the fort for the Old Bowery, and he has plans for a new reality show for the Travel Channel called Baggage Battles.

But Mr. Leroy has a connection with the wall, as well. In fact, he asserts, he was part of the wall’s rehabilitation into the graffiti wall it is today.

“In 2005, I approached Tony,” he said, referring to his landlord, who owns the graffiti wall. “I said, ‘Let’s do a recreation of the Keith Haring.” But that didn’t work out. “I didn’t come up with the money. It was too hard a deal, it was too complicated. Then he got together with Jeffrey Deitch and did the Keith Haring wall and that’s how that wall got started. But we were the catalyst for the idea of recreating the wall. Now it’s become this big thing. I let Mr. Brainwash jump the fence, letting guys jump the fence and graffiti the wall for years before. In fact the guy who did the last illegal mural is coming to the party tonight. Omni.”

As of Monday, the wall now has several statements painted onto it written in a language that Retna has created from hieroglyphs that blend graffiti with ancient Incan, Egyptian, Hebrew and Asian calligraphy:

“All the great ones are conscious of universal truths”

“The power of the world always works in circles”