The votes totaled 329 for Rothman and 72 for Pascrell.

The Passaic-based Pascrell reveled in putting points on the board in Rothman’s backyard.

“We started with zero,” said the congressman. “This is a great victory for our side.”

To Pascrell’s chagrin, the county committee leadership did not permit the candidates to speak prior to committee voting.

Only after Rothman’s expected victory did the Bergen crowd hear from the two men.

Pascrell made the most of it.

“I’ve taken on the tea party every day on issues,” he said. “I continue to fight to preserve Medicare and Social Security. I intend to support the agenda of President Obama, not just sometimes but all the time.”

The Pascrell Team rallied around the congressman in the parking lot outside the union hall, chanting “Pascrell! Pascrell!” but Rothman campaign spokesman Paul Swibinski called their flurry of enthusiasm wishful thinking. 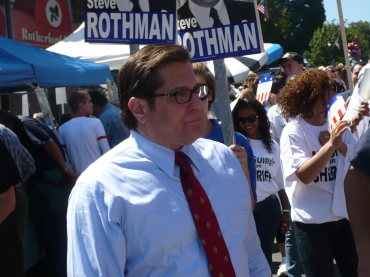