After serving two three-year terms, Assemblyman Scott Rumana, (R-40), Wayne, will step down as chair of the Passaic County Republican Commiittee at the end of his term in June.

The committee anticipates ceding power to Scott Heck, the Republican leader in Ringwood.

A pitched battle between two GOP camps defined Rumana’s tenure as chairman, with one side forming behind former Republican Chairman Peter Murphy and the other behind Rumana.

A Rumana loyalist, Heck has the backing of Murphy for the chairmanship, a source close to the process told PolitickerNJ.com.

“Having brought the party back from multiple years of losses both on the county level as well as many Passaic County municipalities I’m satisfied that we’ve accomplished many positive goals for the party over the last six years and provided a solid basis for future Republican victories,” Rumana said.

“I’ve spoken with my good friend Scott Heck many times over the past year or so about his interest in succeeding me as chairman. Thankfully, Scott has accepted the challenge and I’m sure with the support of the rest of the Passaic County leadership will be working with me as our new chairman to continue the work we began six years ago. Along with Senator O’toole as a team we believe we have resolved the longtime differences within the Passaic County Republican Party and will unite behind our new leadership team.”

For his part, Murphy wouldn’t talk about Rumana.

He focused on Heck.

O’Toole, who last year gave up his own party chairmanship in Essex, said, “Scott did a terrific job. He’s going to focus now on his job as a legislator. Scott Heck I’ve known a long time and he’s going to help get us to the next level.”

Sources said the move to end the Rumana era comes as county party forces eye their organizational infrastructure and aim to tighten up an operation dogged by in-fighting ahead of county elections this year and the governor’s presumed 2013 re-election bid. 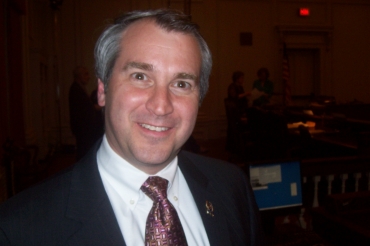