We know it must be hard for Sacha Baron Cohen to top his Academy Award red carpet stunt, when he showed up in-character as General Aladeen of the Republic of Wadiya. After dumping Kim Jong Il’s ashes all over Ryan Seacrest he was escorted off the scene by security guards who may or may not have been in on the viral marketing hoax for his film The Dictator.

Still, we were hoping for a little more from the actual trailer for the film, released yesterday. With both Borat and Bruno, Mr. Cohen proved he could shock audiences with his mockumentary format. But bottle his genius into a scripted comedy, and you end up with a trailer that looks like You Don’t Mess with the Zohan but with more jokes about blowing up the Empire State State building.


You know what would have really grabbed our attention? If that end scene in the chopper had been improvised with actual clueless tourists. We’re not suggesting Mr. Cohen run around New York trying to capitalize off of America’s fears of another 9/11, we’re just saying if he was planning to do it anyway, he might as well have made it funny. Mr. Cohen is so funny precisely because he’s not afraid of the repercussions or public outrage of his stunts. But when he’s just reading lines to other actors, the subversive element disappears as the movie is designed for shock value of its audience, not participants. Which ironically, makes it less funny and/or shocking.

Plus, how good would an arrest or two be for hyping up the movie? If Sacha Baron Cohen could have gotten the NYPD’s counter-terrorism unit to actually start investigating him, so much the better…for The Dictator, we mean. 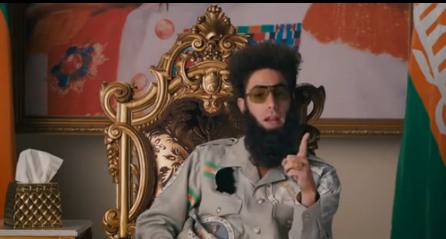