“How can we accept you as independent and unaffiliated when the only affiliation you’ve ever had is Republican?” said Scutari, who noted Kwon’s 14-year stretch as a Republican voter in New York.

“I believe I am an unaffiliated, independent person,” said Kwon.

Scutari pointed out to Kwon the historical balance on the Supreme Court among party affiliations.

“If you are confirmed today that split would no longer be adhered to,” said the senator, pointing out that Kwon would give an edge to the GOP, though he presents himself as an independent.

“I’m not sure of that,” said the nominee.

“Should we accept you as an unaffiliated nominee? Do you think it’s important to maintain a certain balance?” Scutari wondered.

“I believe balance should be achieved in many ways,” said Kwon.

Christie this morning told reporters that even if one concede the fact of counting Kwon as a Republican – which Christie does not – that would still leave a court with a four Republican majority for just the third time in the court’s history.  Seven times prior a four-member Democratic majority sat on the court. 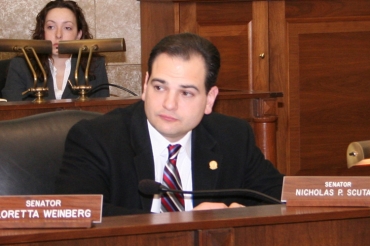