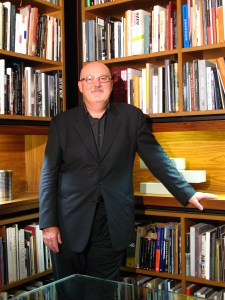 Chelsea gallerist Sean Kelly has added a whopping six artists over the past 18 months, including big names like Kehinde Wiley, Alec Soth and Terence Koh. To show his burgeoning roster, he’s moving in the fall to a two-story, 22,000-square-foot gallery at 36th Street and 10th Avenue, the current home of nonprofit Exit Art, which is closing after 30 years. It’s three times larger than Mr. Kelly’s current space. “The minute we saw it we knew it was the right one,” Mr. Kelly told The Observer. He’d been looking for a year.

“The numbers speak for themselves,” he added. “It’s an enormous amount of exponential growth in terms of opportunities for artists, more space for us, and for accommodating additional staff.”

New York-based architect Toshiko Mori, who has designed Issey Mikaye stores, exhibitions at numerous museums (including the Museum of Modern Art and the Cooper-Hewitt) and the master plan for New York University, is handling the project.

Though it’s a bit north of the main Chelsea grid, the space will be close to the next stretch of the High Line and the Hudson Yards development. And its sheer size puts Mr. Kelly in league with the world’s most powerful dealers, like Gagosian, whose 24th Street location measures 25,000 square feet.

And Mr. Kelly is not stopping here. “We’re refining and extending the program,” he said.