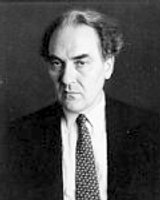 In his column about art for The New York Observer, Hilton Kramer, who passed away Tuesday at the age of 84, came to define this paper’s signature style. Most publicists would call it “snarky” (which is admittedly kind of true), though we prefer the phrase “New York’s Scorecard.” Kramer epitomized a sort of bitchy intellectualism that is sadly rare in a lot of writing about art and culture today (at least the intellectualism part). He could speak with as much wit and thoughtfulness about a forgotten modern painter as he could about the state of art institutions in New York. Below, a selection of some of our favorite pieces by Kramer, taken from The Observer archives.

“Saffron Succotash! Those Absurd Gates A Blight on Art, City,” Feb. 28, 2005: “My own view is that the gates are nothing less than an unforgivable defacement of a public treasure, and everyone responsible for promoting it-including our publicity-seeking Mayor-should be held accountable, not only for supporting bad taste but for violating public trust.”

“Monster Minimalism: Dia Beacon Museum A Vast, Ascetic Folly,” Sept. 15, 2003: “As for boredom, well, this was one of those attributes of Minimalism that its champions proudly acclaimed from the outset. ‘Boring the public,’ wrote Barbara Rose in her ‘ABC’ defense of Minimalism, ‘is one way of testing its commitment. The new artists seem to be extremely chary: approval, they, know, is easy to come by in this sellers’ market for culture, but commitment is nearly impossible to elicit. So they make their art as difficult, remote, aloof and indigestible as possible. One way to achieve this is to make art boring.’ By this measure-both the boredom quotient itself and the scale of financial commitment to boredom as an artistic principle-Dia:Beacon’s achievement is destined to remain unrivaled for the foreseeable future.”

“The Museum Follies: Giant Expansions Of Vast Pretension,” May 5, 2003: “Since the new breed of directors and curators in charge of our trendiest museums like to speak of narratives-or even, God help us, narrativity-the question of the moment must be this: How are we to characterize the narrative of turbulence and disarray that has lately overtaken some of our local institutions? I suggest that we think of it as the Museum Expansion Follies, for it’s in the service of this muddled narrative that a lot of money is spent (and lost) these days without much regard for negative consequences.”

“In Visual Art Critic, I’m Better Known Than Immanuel Kant,” Jan. 13, 2003: “Some of the name-recognition and popularity charts in The Visual Art Critic are really amusing. In the category of name recognition-that is, the percentage of critics who rated other critics-I didn’t do too badly, coming in with a score of 80, the same as John Ruskin, one of my idols, but one point higher than Sister Wendy and Immanuel Kant-talk about strange bedfellows!-and three points higher than Baudelaire, another of my critical idols.”

“Jewish Museum Show, Full of Vile Crap, Not to Be Forgiven,” April 1, 2002: “Exactly why a respected institution devoted to the study and exhibition of Jewish art and culture should wish to inflict this numbskull mockery of the Holocaust on the New York public is not a question easily answered. Who could have imagined that the question would ever have to be raised in this quarter? Given the cynicism that now reigns in certain parts of the museum profession, opportunism-the hope of reaping the rewards of controversy-cannot be ruled out. Nor can the sheer stupidity of museum curators and the trustees who support their folly. What I suspect is the case with the Mirroring Evil show, however, is an ardent desire to mount an exhibition that is seen to be ‘transgressive,’ to cite the contemporary art world’s favorite cant term of high praise.”

More of Kramer’s columns can be found here.