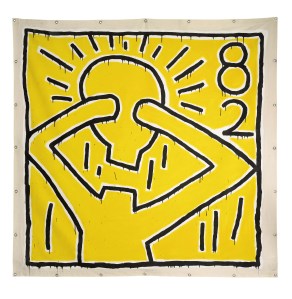 The art world is abuzz with Keith Haring these days. With the Brooklyn Museum exhibiting his early work, galleries and cultural institutions like MoMA and Pace Prints have also gotten on board and now Sotheby’s has announced its own selling exhibition, “Keith Haring: Shine On.” Opening March 30, it presents 32 works across a wide range of mediums, like canvases, tarps and sculpture, ranging in value from $25,000 to $1.5 million.

One thing you won’t find at the Sotheby’s exhibition, however, is the artist’s famous Subway Drawings, of which there are 31 on view at the Brooklyn Museum, all on loan from a private collection.

“We haven’t included them because we cannot guarantee authenticity,” said Miety Heiden, head of contemporary private sales at Sotheby’s. “People have been trying for years and years to get them authenticated.”

According to Julia Gruen, executive director of the Keith Haring Foundation, the Foundation does not authenticate Subway Drawings. “We don’t know how many still exist,” she told The Observer over email. “Probably hundreds.”

Subway Drawings are, however, to be found in “Spring Fever,” an group show currently on view at the Chelsea gallery of dealer Tony Shafrazi who, back when his gallery was in SoHo, gave Haring his first solo show. Mr. Shafrazi is exhibiting 12 pieces by Haring, including three Subway Drawings, all of them for sale–“if and when we have a proper offer,” said director Hiroko Onoda. The show also includes Haring’s paintings and tarps, and an enamel-on-steel sculpture from 1987 that is similar to a 1986 sculpture that achieved $1.8 million at Sotheby’s last November, surpassing its high estimate of $1.5 million.

“If anyone is a true Keith Haring fan and a connoisseur of that era, in the ’80s, it’s at the core of what they’re doing, Ms. Onoda said of the Subway Drawings, acknowledging that “some people might shy away” from them due to the authentication issues.

While it may regularly sell above its estimates at public auction, Haring’s work has not sold as well as his peers like Jean-Michel Basquiat. According to the Artnet database, Basquiat’s current worldwide auction record is the $14.6 million achieved at Sotheby’s New York at the height of the last art market boom in May, 2007, for an untitled painting from 1981. Last June, a Basquiat painting from the same year made $8.7 million at Sotheby’s in London. Haring’s record is just $2.8 million, for an ink-on-tarpaulin piece from 1982 that sold at Christie’s New York in May, 2007.

“[Haring] has always been somebody we felt was undervalued,” Ms. Heiden said. “His work is relatively cheap for what it is.”

Whether or not the renewed interest in Haring’s work, as exemplified by the Brooklyn Museum show, will bleed over into renewed interest by collectors and higher sales at the auction houses and galleries is difficult to say. “It helps to give them confidence that he’s seen as a real artist and not just a street artist,” said Ms. Heiden. “Will it make a huge difference in prices? I’m not so sure.”

To honor Haring’s nightlife days, Sotheby’s has painted the S2 gallery black and invited Fab 5 Freddy to DJ. “We wanted to create a Club 57 feel,” said Ms. Heiden. In addition to Fab 5 Freddy, there are expected to be a bevy of Haring’s old pals coming out, as there were for the Rammellzee opening at Suzanne Geiss Company recently. But after all, people shouldn’t get too crazy. “This is in the end a selling exhibition,” Ms. Heiden said and laughed. “It’s not a club.”