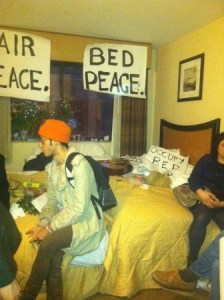 The Comfort Inn on Ludlow, which hosted the 2012 edition of the Dependent Art Fair this past Saturday, seems anomalous not just for the neighborhood, but also when compared to other Comfort Inns. The elevator seemed to take hours between the call and the door opening, and the building sprawls up where the other motels sprawl wide. There are, occasionally, sensuous paintings of women in the tan hallways and the guy behind the front desk might, sotto voce, offer you a somehow-creepy group discount and then give you like 27 cards to distribute to potential guests, as though it wouldn’t be sufficient to tell them, “Yeah, it’s the Comfort Inn on the Lower East Side.”

The irony of this whole situation, though, seemed just fine for the 21 dealers of Dependent, which takes its name from the now-established Independent Art Fair and its format from the original room-to-room Armory Show at the Gramercy Park Hotel, then called the Gramercy International. These galleries, professional L.E.S.-ers and outer borough-ites comfortable with pop-ups, could exist anywhere, the weirder the better, and their clientele packed the hallways, noon to 8 p.m., drinking beer and speaking in soft voices. The afore-referenced sleaziness didn’t hurt either.

“It’s a sad, dismal, masturbating-alone-in-your-room kind of vibe,” said the artist Ragnar Kjartansson, approvingly, as he twirled a pair of aviators and he drank in the fourth floor.

Some of the better sleaziness could be found at the Ramiken Crucible booth-room on the eighth floor, where 12 tripodal stools cast from Andra Ursuta’s bikini-ed behind, in ’90s neon resin and complete with labia, balanced on the queen-sized bed.

“This is the artist’s ass, those are her goosebumps,” Mike Egan, of the gallery, told those who entered. The 12-stool piece actually sold within the first half hour of the fair, for $30,000. Did the collector give any indication as to what he was going to do with it? “I think he said he was having a seder,” Mr. Egan said.

On the lower end of items for sale were items like a series of clay-filled flip-phones for $200, found in a bedside drawer of a room shared by Cleopatra’s and the Shandaken Project.

“The great thing about them is that they’re part of an infinitely continuing series,” said the artist, Andrés Laracuente. “As long as capitalism continues its march of planned obsolescence.” He’s doing his first iPhone next week. That room also featured a video by David Berezin, a relaxing loop of a rippling pond with karaoke-like title text over it, in cursive that read, “Fun for a While.”

Cleopatra’s co-founder Bridget Finn affected a dazed look behind her big glasses. “After having spent a day with it, I think he’s a genius,” she said.

There were plenty of bathroom bits. James Fuentes’s booth had an inflatable rat with caution tape in it, a self-portrait of the artist Lizzi Bougatsos, and over at Ramiken, the Michael Krebber Memorial & Graduate Research Center invited patrons to close the door behind them and take in the candlelit bathroom, jazzy iPod music and a pile of pillows stacked in the bathtub. At Callicoon gallery, there was an installation by James Hoff that consisted of a book titled A Study of Splashes placed directly in front of the toilet.

“Well, there’s obviously a sight gag to it, said owner Photios Giovanis, craning his neck over the frame as if hesitant to step into the work. “Plus, you know, splashes. You don’t think of that as something you study.”

In many ways, it was true to the spirit in which the Armory Show started, said the fair’s founder Rose Marcus.

“The interesting thing is that the Gramercy Park Hotel was a crappy hotel when they were there,” she said, sprawled on a bed in the room for a booth described as EF III, on the door. She hadn’t necessarily wanted to do the fair for a second year, after last year’s premiere at a Sheraton in Chelsea, but the demand for an alternative-alternative fair proved to be so great that she relented, and was glad that she did.

“Cool things happen here,” she said and sat up to gesture at a painting draped over the window, hanging from the pants clips of two hangers wedged above it. “They wouldn’t let these people drill holes in the ceiling so they had to improvise.

Regina Rex had two statues by Dave Hardy built on the bed that kissed the ceiling, one with a generator at the bottom, and Canada gallery staged a John-and-Yoko bed-in. At 6 p.m., at the Audio Visual Arts booth, sound artist and lamination advocate Ken Montgomery read a manifesto on lamination, and invited attendees to laminate things using a device he’d placed on an ironing board in the middle of the bed. A wiry man with grey hair, he didn’t look unlike Jack Kevorkian and was accompanied by a belly dancer named Enchantress, who wore glow sticks. Much of the advertised attraction was in hearing the gears of his lamination machine, the sound, he said, of the transition from the ephemeral to the permanent.

“It hurts a little in the ears but until Larry comes it’s just going to have to do,” he said.