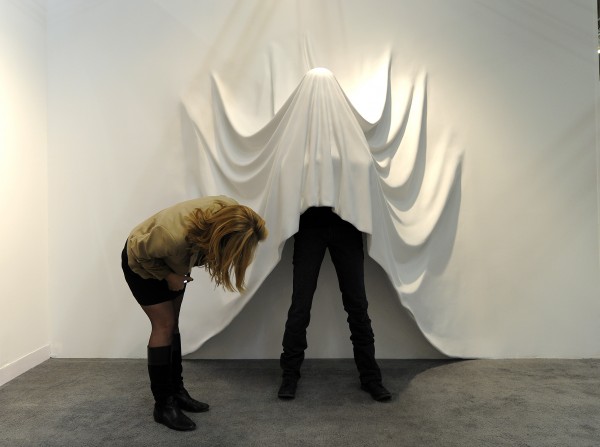 Examining a work by Daniel Arsham at the 2011 Armory Show. (Photo by Timothy A. Clary/AFP/Getty Images)

Tuesday morning, at a press preview at the opening of Armory Week, at the ADAA’s Art Show at the Park Avenue Armory, a podium for Mayor Bloomberg was set up in front of Tanya Bonakdar’s booth. She was displaying the work of Sarah Sze, who had made a complex kind of coffee table adorned with geometric cube sculptures hanging from a curved metal pole.

The mayor entered with an awkward hello, made a joke about Jeremy Lin to the director of the ADAA, Linda Blumberg, and began speaking.

“This is another one of those good days for New York,” he said. “I always like to boast that New York is the art and cultural capital of the world. If you’re looking for proof of that, this is your lucky week. The Art Show hangs in the Armory on Park and the Armory Show is parked in a hangar on the river. Now you have to work very hard to get that right.” This received a chuckle from the audience. Following remarks from Lucy Mitchell-Innes, president of the ADAA, and Paul Morris, founding director of the Armory Show, he repeated that joke, adding, “I’m so proud of my speech writer for coming up with that.”

As Mr. Bloomberg said, it’s Armory Week, and New York is awash in art. More than 500 galleries are offering their wares at contemporary art fairs around town. About a third—more than 170—of them hail from Europe, and almost as many come from elsewhere beyond the Big Apple. And if it feels even more frenetic this year, it may be because the fairs coincide with a biennial (at the Whitney Museum), a triennial (at the New Museum) and a blockbuster Cindy Sherman retrospective (at MoMA).

But the week is different in another way: hanging over it is the specter of competition from London’s Frieze art fair, which arrives for its inaugural New York edition in May. The 14-year-old Armory Show—the biggest attraction with around 230 exhibitors and, last year, attendance of 65,000—has had to up its game, by redesigning the two far West Side piers on which it takes place, and streamlining its exhibitor list by 50 galleries.

The Armory and its piers haven’t gotten high marks in recent years, and have lost heavy-hitter dealers like Matthew Marks, a cofounder of the fair in the ’90s. One dealer made reference to the “abysmal scale” of a fair that has become “too large,” “too impersonal,” “too business-oriented” and “too congested.” The layout has been notoriously cramped and awkward. But on Sunday night, The Observer toured Pier 94 with architects Timothy Bade, Jane Stageberg and Martin Cox, who have renovated the fair, and saw a changed picture. There are wide, spacious aisles—two instead of three along the main drags, allowing for easy circulation—and public lounges scattered throughout, each marked with a painted tower as a landmark—green for the Artforum lounge, red for the new sit-down restaurant.

“We thought about having this more intimate experience with art and artists,” Mr. Bade said.

After visiting fairs like Frieze in London and Art Basel Miami Beach, the architects concluded that fairs have a uniformity. “It’s the same Herman Miller furniture—they could be anywhere,” Mr. Cox said. “That was [founding director] Paul [Morris]’s challenge early on: ‘It’s a New York institution, so why not celebrate it?’” So they’ve repurposed discarded furniture from New York streets, repairing it and painting it taxi-cab yellow for one of the coffee bars.

Arriving at the end of the interview, after visiting the VIP section, Mr. Morris was beaming. “It’s huge,” he said. “It’s what it always should have been.”

“There was a very strategic idea to make the Armory a more boutique fair,” said managing director Noah Horowitz. The Armory has created a section for single-artist shows, improved food services, launched a new media lounge in partnership with dealer Edward Winkleman’s Moving Image video art fair, and added a special VIP hour to allow collectors to shop without having to navigate hordes of people.

Perhaps it is the spiffed-up design and shorter exhibitor list that has made the Armory’s longest standing satellite event, the 11-year-old Scope fair, edge closer. From a tent in Lincoln Center, it has moved to a new location just a few blocks from the piers.

Speaking of satellites, Frieze and its satellites could change the calculus for events other than the Armory. Already, the Pulse fair, an Armory satellite for six years, has jumped ship for Frieze week. Independent, a three-year-old fair in the former Dia Foundation building that identifies as nontraditional—booth walls are scant; one dealer characterized it as “communal and interactive”—may yet feel the heat from Frieze. More than half of this year’s 43 participants are also exhibiting at the London transplant. The two events are very different, Independent’s co-director, Laura Mitterrand, stressed; those galleries are “not approaching Independent as a regular art fair, but more as a project,” she said. “They’re just a little more adventurous than they would be for a traditional art fair.”

But for two exhibitors—Ms. Mitterrand wouldn’t say which—getting into Frieze meant dropping out of Independent. They are coming from outside New York, and the extra shipping, travel and booth costs were prohibitive.

If Frieze proves successful, will Independent continue to have a raison d’être? “We’re taking it one year at a time,” Ms. Mitterrand said. “When we first started, we thought it would be a one-time thing.”

The Armory’s slipping stature hasn’t helped matters. “Some people don’t come to the Armory anymore, and that’s bad for us,” she said. But, even if the Armory has slipped, people now come to New York just for Independent, which is itself getting a makeover this year, from architect Christian Wassmann. There used to be more galleries that did both the Armory and Independent, Ms. Mitterrand said, but now it’s down to just Sprüth Magers, which has branches in London, Berlin and Cologne, and New York’s Andrew Kreps. (Mr. Kreps is warming up for a trifecta; he’s also doing Frieze.) A few dealers who did the Armory last year—Bortolami and Untitled, both New Yorkers, and Glasgow’s Modern Institute—have switched to Independent. (Bortolami used to do both.) Untitled and its Lower East Side neighbor, Feature Inc., will return to the former Dia building in May, when it plays home to the first New York edition of the New Art Dealers Alliance (NADA) fair, a satellite of Frieze, and another event that skews toward young galleries showing young artists.

Got that straight? There’s more!

Armory Week isn’t only for cutting-edge contemporary art. Older material can be found at the ADAA Art Show, as well as at the Armory Show’s international “Armory Modern” section, on Pier 92, introduced in 2009. Two years ago, the ADAA did away with the system by which a member gallery could be rotated into the Art Show—it accommodates a mere 70 out of its 170-dealer membership, which continues to grow—if it hadn’t gotten into the fair for two editions. Now, admission is based entirely on what dealers propose to put in their booths, making it, essentially, a curated fair. Some New York-based ADAA members, like Hirschl & Adler and James Goodman, have gotten into the habit of doing both fairs. Mr. Goodman is bringing more contemporary paintings, like those of Alex Katz, to Pier 92, and older drawings—by Picasso, Leger, Lichtenstein—to the Art Show. For others, being in both fairs came as a surprise. New York gallerist Pavel Zoubok, who specializes in collage, had already said yes to the Armory when he got into the Art Show, where he’d been wait-listed. (Rhinebeck, N.Y.’s Stephen Mazoh had to drop out due, a representative of Mr. Mazoh told The Observer over the phone, to back surgery.) “I will man the ADAA with an assistant, and my associate director will work at Pier 92,” he said. As for the actual gallery, “an assistant will hold down the fort.”

But this week all eyes will be on the Armory Show, where a backlash to the backlash may be underway. “We have this nostalgic idea of showing new work at the Armory Show,” said Chelsea dealer Sean Horton, who will debut new paintings by Wallace Whitney. “It still has a weightiness to it.”

For New York dealers, of course, there is still a glaring question: Why bother doing a New York fair at all? “It’s an opportunity to stand out and show work in a different way,” said Pascal Spengemann, the newly minted director of Marlborough Chelsea, who’s bringing sculptures by Robert Lazzarini and covering his booth’s walls in wallpaper designed by Justin Lowe and Jonah Freeman.

It’s a chance to meet new clients and catch up with old ones. Dealers say the Armory no longer attracts the heavy-spending international clientele that it once did, but that it has won the loyalty of a strong group of collectors who are able and willing to buy regularly in the $25,000-and-under range, people who may not frequent Chelsea or feel comfortable at the Independent but are passionate about art.

The Armory Show is working to cultivate upper-tier collectors. There are rumors that some top-flight dealers received discounted booths in order to participate, the assumption being that their presence would lure high-level buyers. Among those that have returned are powerhouses like New York’s David Zwirner gallery—which will hand over its booth to site-specific work by the design-heavy Michael Riedel—and Sprüth Magers.

Though some dealers reported hearing from collectors that they’re forgoing their annual March visit to New York to come in May for Frieze, and dealers complain about the cost and logistics of working at the piers (pricey Wi-Fi and union fees), it’s premature to assume that the Armory is in big trouble. Fairs—FIAC in Paris, under the leadership of Jennifer Flay, for instance—have turned around in the past.

With price points for booths remaining unchanged—spaces reportedly run up to $40,000, depending on square footage—the parent company, Merchandise Mart Properties Inc. (MMPI) stands to make less money this year, but it may succeed in saving its flagship product—no small matter after announcing it will shutter its 30-year-old Art Chicago fair. “People have been giving them a hard time,” said one dealer of the Armory, “and pronouncing them dead before they are.”

“The layout is phenomenal, the space is really nice now, and user friendly, and the roster is impressive,” said collector Michael Hort, who is continuing his tradition of hosting a private Armory Show brunch to show off his collection. What about Frieze? “Two art fairs in New York? I say great!”