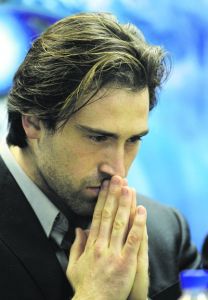 US filmmaker Sean Stone, son of Oscar-winning director Oliver Stone, holds a press conference in Tehran on February 17, 2012 few days after he converted to Islam in Iran, where he is making a documentary. According to Iran’s Fars news agency, Sean Stone had become a Shiite and had chosen to be known by the Muslim first name Ali. AFP PHOTO/ATTA KENARE (Photo credit should read ATTA KENARE/AFP/Getty Images)