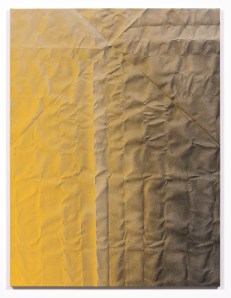 Tauba Auerbach at Paula Cooper
Opens May 5
This is unquestionably the season’s most anticipated show by a young artist. After trompe/Op painter Tauba Auerbach’s dealer, Jeffrey Deitch, left town to head L.A.’s Museum of Contemporary Art two years ago, while her work was on view at the last edition of the Whitney Biennial, she was courted by numerous high-profile dealers but settled on Paula Cooper. She has been weaving to make paintings recently, and focusing increasingly on color, but details remain scarce on her latest developments. “I paint and paint and then destroy nine out of ten paintings,” she recently told an interviewer when asked about her projects. “My standards are increasingly hard to meet.”

Alice Neel at David Zwirner
May 4–June 23, 2012
Alice Neel, who died in 1984 at the age of 84, remains one of America’s great but too-little-known artists, despite a recent biography by Phoebe Hoban: her brushy, piercingly perceptive portraits were outliers in an era enchanted with abstraction and Pop imagery. For its second show with Neel’s estate, Zwirner will exhibit iconic portraits—the young artist Joey Scaggs holding a leather jacket over his shoulder, energetic psychologist Sherry Speeth in a gray suit, nearly leaping out of his chair—alongside still lifes. Though less regularly exhibited than her portraits, these exacting scenes of flowers and interiors approach representation at an angle that is similarly, pleasantly askew.

Martha Rosler at Mitchell-Innes & Nash
April 20–May 26
The redoubtable, politically engaged Martha Rosler—whose complete suite of anti-Vietnam War photographs “Bringing the War Home” (1967-72) was just acquired by MoMA—will show black-and-white and color photographs, shot during a January 1981 trip she took to Cuba. These photos are being printed for the first time. Small in scale, the images show scenes of life in the communist nation—shots of storefronts, streets and murals of Fidel Castro—in the artist’s inimitable, offhand and elegant style.

Tom Thayer at Derek Eller
April 27–May 26
Over the past few years, Tom Thayer’s strangely enchanting, determinedly lo-fi animations and performances—often featuring birds and sticklike humans that he fashions from paper and tape and manipulates on strings—have slowly but surely gained attention. He’s attributed his hermetic, childlike iconography to “vivid, early memories of kindergarten and preschool in the 1970s.” A subtle, sinister undertone prevents the work from veering into preciousness. Following a star turn in this year’s Whitney Biennial, he has set a high bar for his solo debut at Eller.

Sturtevant at Gavin Brown’s Enterprise
May 5–June 23
Sturtevant is the original punk. An integral member of the New York avant-garde art scene in the 1960s, she spent her time lampooning its leading men by producing identical copies of their most iconic creations: Johns targets, Warhol Marilyns, Lichtenstein damsels in distress. They’ve fetched big sums recently—a 1966 Sturtevant Lichtenstein made $711,000, an artist record, back in November at Phillips New York. GBE will show her nine-screen, narrative-free Elastic Tango video, which features jars of mayonnaise, Beavis and Butthead and other delights, and was a hit last summer at the Venice Biennale.

‘Spirit Level’ at Gladstone
March 24–April 21
Named for a collection of poetry by Irish bard Seamus Heaney, this show is curated by Gladstone artist Ugo Rondinone and features more than 100 pieces by 18 artists, including Amy Granat, Klara Lidén (whose Christmas tree-filled show at Reena Spaulings was one of the winter’s highlights, and whose solo show opens at the New Museum in May), Ann Craven, Joe Bradley, and Martin Boyce. Also here is work by Rudolf Schwarzkogler, the Austrian performance artist long rumored to have died by cutting off his penis during an “action” performance. This should be one of the year’s most ambitious group show undertakings.

Xylor Jane at Canada
May 3–June 3
If one were to mix Sol LeWitt’s repetitive geometry with the mathematical fixations and jarring palettes of Alfred Jensen, and then pour on a bit of gently simmering anarchy, the result may approximate Xylor Jane’s paintings. She takes simple patterns and follows them obsessively to their conclusions: dots and numbers filling every inch of a canvas, though never quite cleanly, as in a LeWitt. Their accomplishment is defined by hard-wrought completion, not flawless execution. The work—to say nothing of the paintings’ pulsing color—is its own reward.

Cindy Sherman at Metro Pictures
April 26–June 9
For her latest show at Metro Pictures, which first exhibited her work back in 1980, Cindy Sherman will present new photographs that she made using attire mined from Chanel’s voluminous archive. As her blockbuster MoMA retrospective proved, Ms. Sherman has managed a nearly flawless career, achieving a relentless method of reinvention with an economy of means: she poses as every character in her photographs. The artist has adopted digital manipulation in recent years, subtly altering her
appearance and toying with her backgrounds (including landscapes she shot while traveling, in some of these pieces), so this latest body of work may surprise.

Elaine Cameron-Weir at Ramiken Crucible
April 1–May 13
Elaine Cameron-Weir’s first show at Ramiken, last year, featured a Persian rug dyed with rich indigo; a long, thin slice of wood covered with tobacco; and a wall-hung piece with wire mesh affixed with wax, the perfume Guerlain L’heure Bleue and pyralene, among other exotic materials. Trafficking in a romantic, elegiac strain of postminimalism, she makes art whose ephemeral components—and smells—conjure memories at the same time that they threaten to disappear.

Yuji Agematsu at Real Fine Arts
March 31–April 29
Japanese-American artist Yuji Agematsu will have his first-ever solo show at the increasingly potent Greenpoint outfit Real Fine Arts, exhibiting pieces of detritus he has collected while wandering the city for the past three decades. The battered, castoff works constitute a personal, chance-inflected history of his flânerie, and an alternative map of New York.