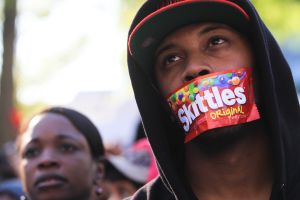 ATLANTA, GA – MARCH 26: College student Jajuan Kelley covers his mouth with a Skittles wrapper as he stands in a crowd of thousands rallying at the Georgia State Capitol in memory of slain Florida teenager Trayvon Martin on March 26, 2012 in Atlanta, Georgia. Protests have been nationwide in reaction to the death of Trayvon Martin, the Florida teenager whose shooting by a neighborhood watch captain has led to questions of the “Stand Your Ground” law in Florida and other states. (Photo by Jessica McGowan/Getty Images)