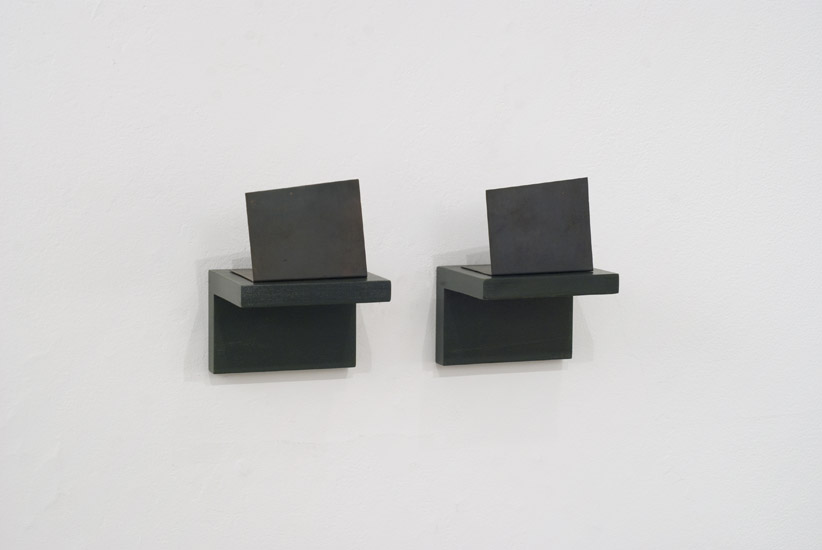 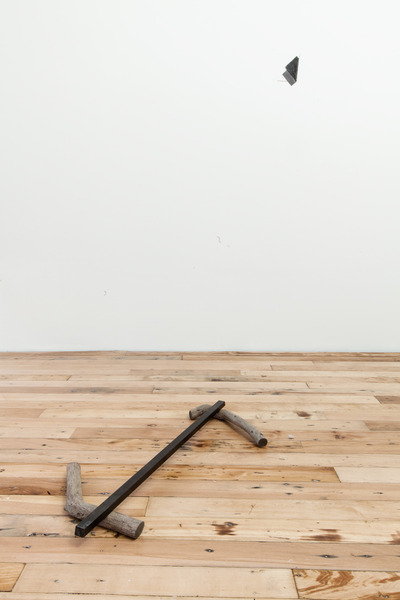 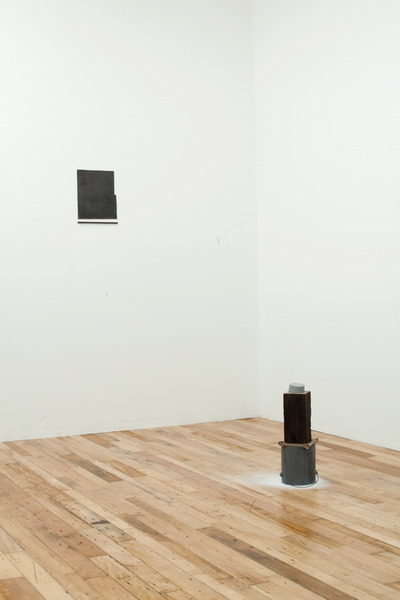 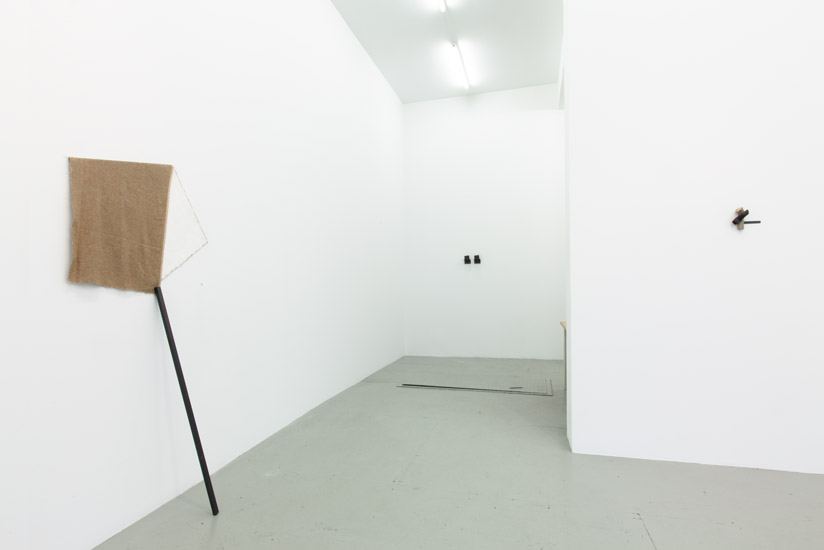 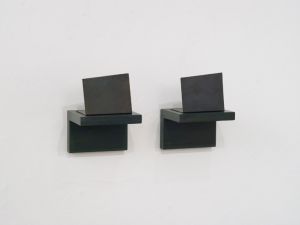 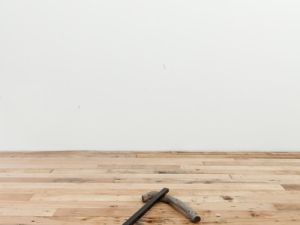 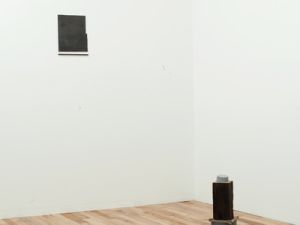 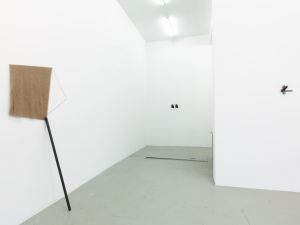 Bill Walton died in 2010, after spending most of his life in Philadelphia, where he worked as a printer, made handsome, precise, majestically self-sufficient sculpture, and showed extensively. But his extraordinary two-venue exhibition on the Lower East Side–at the just-opened JTT Gallery on Suffolk Street, and at James Fuentes on Delancey–marks his first solo show in New York.

Stack Piece sets a three-and-a-quarter-inch length of iron rod–just a hair shorter than what a Tammany-era hoodlum might have carried–horizontally on a finely finished brown wooden block, which itself sits on a rectangular piece of copper. The whole, not more than an inch thick, is fastened to the wall like a crucifix, with the rod extending past the edges of the wood, and the wood, in turn, both thicker and wider than the copper. This stacking of heavy textures points as directly as a plumb line at the earth’s iron core. Like a figure heavily stamped into a penny, the piece creates an impression of force and weight unrelated to its size.

In Complex Roads, a rectangular, scuffed sheet of lead about six inches long is folded once around a length of silver wire with a yellowish tarnish. (If Stack Piece alludes to an old-fashioned blackjack, maybe this is a 1920s dollar bill.) The fold is at an angle, making seven separate edges: the fold’s long edge on the right, and the rectangle’s two straight ends splayed left. The wire winds through the fold and then behind the back, hidden except where it sticks out.

A single fold can create an exponential increase in formal complexity; here it results in gestures that fill the available space absolutely. (Jasmin Tsou, who curated the show for Fuentes as well as in her own gallery, made a good choice in showing as many pieces as she does: since techniques like Walton’s can risk looking twee, but his own pieces have such singular presence, it’s just as well not to give the pieces too much space. But when he doubles a form, the effect is often to make it seem cut in half, or even to put the viewer inside it. In Concrete/Tin, for example, a shiny, unlabeled tin can sits next to a concrete casting of the same shape on a thick wooden shelf. Making a solid concrete duplicate of a mass-produced tin container–who knows what’s inside?–and setting the two side by side brings up any number of ideas, but the ideas are all neatly dispatched again by the thickness of the shelf. It’s more than half as high as the cans, and darker, which makes it part of the piece–which welds over the distinction between art object and support so completely that all the other distinctions are welded over, too. It’s like seeing into the mechanics of consciousness or of intimacy, or being in a place that has no outside.

Folded Signs #5 consists of two objects side by side. On the left, a linen napkin, folded in thirds into a stretched-out irregular pentagon–like Superman upside down, or a very old fashioned Japanese kimono–is painted or soaked in clay-colored gesso and held up by a little copper rod that is nailed right through it, affixing it to the wall. On the right is a small, thick, greenish black panel with a piece of paper towel, painted the same color and folded unevenly in half, attached to its front. The paper towel extends just barely past the edges of the panel at four points, exemplifying the expressive power of the extreme end of understatement: if you have the courage to pitch your voice low enough, you may have your point both ways and come out even louder. The weave of the linen napkin and the quilted pattern of the paper towel are not obscured by their colors.

White Glass, one of several “white glass” pieces in the show, consists of a partially rusted, irregularly severed rectangular piece of iron screwed to the wall with a single screw; a block of brass attached perpendicularly, to make an upside-down L-shaped bracket; a small, flat piece of wood, a quarter of an inch high, exactly as deep as the brass and half as wide, sitting on top, grain forward; and a hand-cast piece of white glass, shaped like a shot glass or tea candle, propped at an angle on the wood, flush to the right side of the bracket. The slightest disturbance could knock the glass off, but the piece is no more fragile than an atom bomb. The bomb, after all, uses only the weak nuclear force, while White Glass partakes of the full splendor of gravity. The tilting, likewise, serves only to emphasize all the right angles by contrast.

To make Sue’s Coat (#4), Walton cut a long vertical notch halfway down the side of a rectangular brass plate and drilled two small holes in the upper corners so it could be nailed to the wall. Underneath, like an underline, he nailed a thicker copper bar. Matte and black, the piece looks at first like it’s been burnt into the wall. Most of Walton’s sculptures consist of multiple pieces that aren’t attached, and he left many of them behind disassembled, in custom-built boxes, with meticulous notes and diagrams. Among other things, he noted the two most important points about Sue’s Coat: “Copper bar is level. No edge on brass sheet is level.”