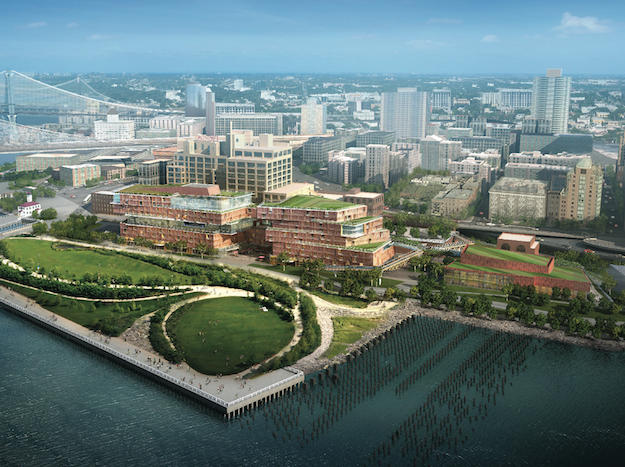 The building at right is a new facility for St. Anne's warehouse. 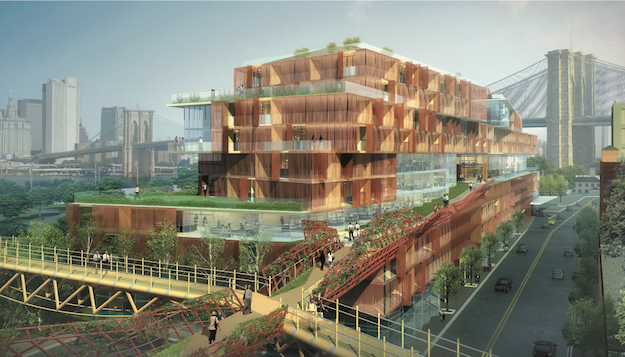 Connection to the Squibb Park Bridge. 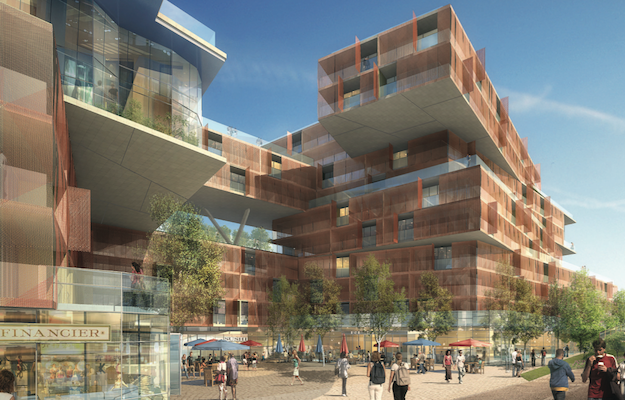 The building features coppery louvres over the windows which open and close with the light or the tenant's choice. 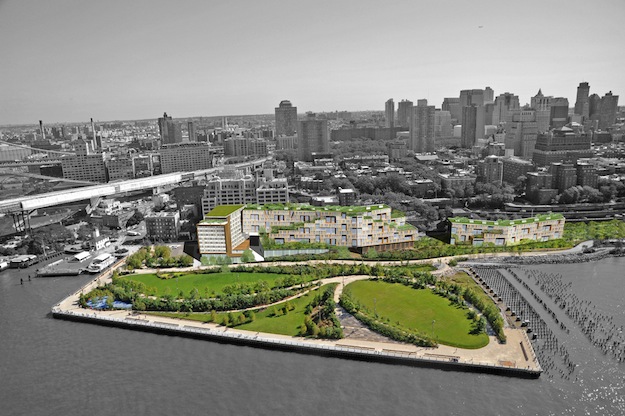 Green roofs are big in this project.
Advertisement 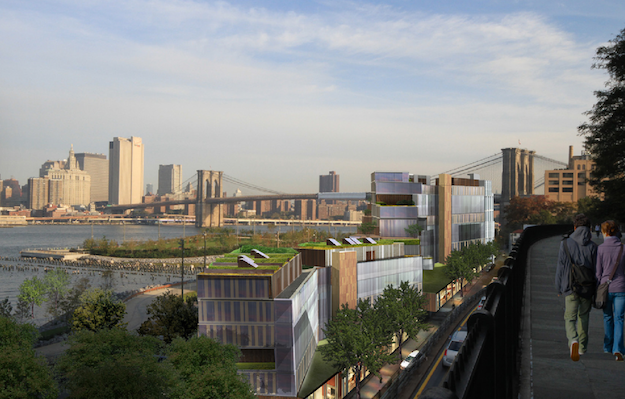 The buildings shift in and out along the waterfront. 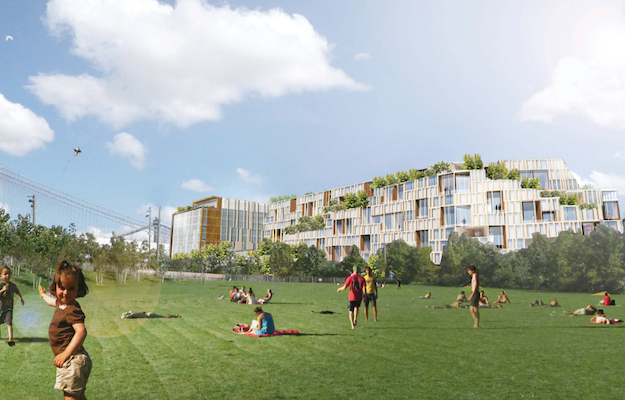 Who wouldn't want this as their front yard?

This proposal is being developed by its hotelier, Starwood, along with a team of upshot builders and designers.
Advertisement 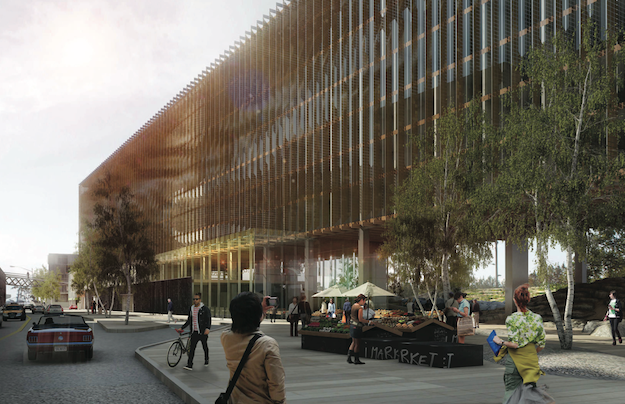 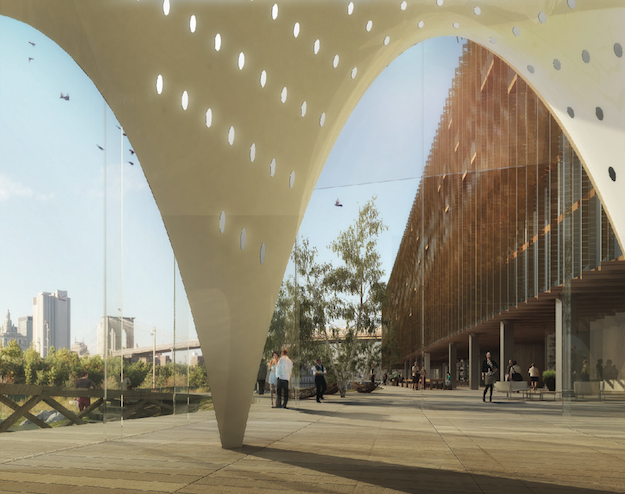 There are numerous pass throughs, keeping the connection between the waterfront and the rest of the city open. 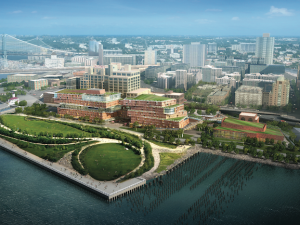 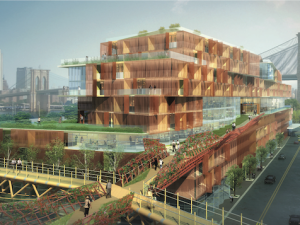 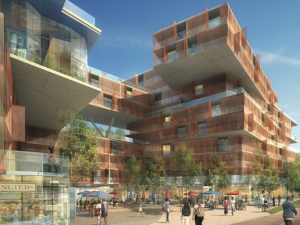 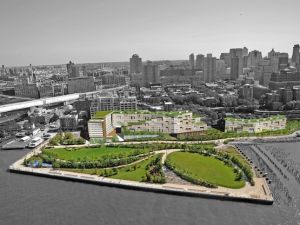 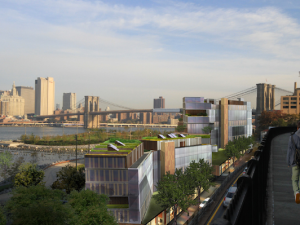 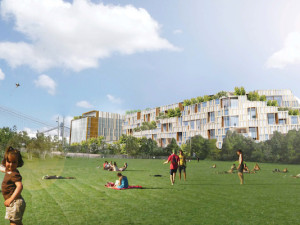 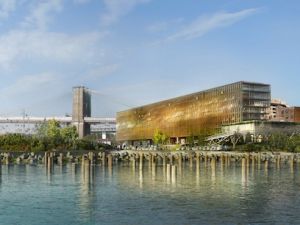 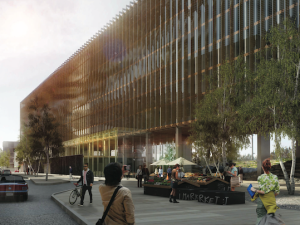 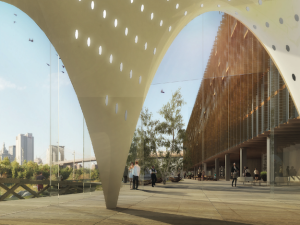 Brooklyn Bridge Park has transformed the borough’s waterfront, replacing derelict warehouses with yuppie-packed lawns and playgrounds. The project would not be possible without the controversial private development surrounding it, a handful of apartment buildings, retail outlets, even a hotel. After all, who wouldn’t want to spend the night in New York overlooking the Brooklyn Bridge?

The developers vying for the right to develop Pier 1, that’s who.

While all of the teams vying for the 100,000-square-foot project have found hotel operators and are prepared to make a go of a waterfront hostel, some bidders, as well as those who considered the project but ultimately decided not to make a pitch for the plot, have told The Observer that having a hotel is a drag on the project.

“It’s a great view, sure, but it’s far from mass transit, it’s far from a lot of activity, you’re basically between the BQE and the park, and that’s about it,” one participant said. “There’s Dumbo, but Dumbo isn’t exactly jumping after dark.”

According to bidders, the Brooklyn Bridge Park Corporation, the city-backed agency responsible for the open space and the development underwriting it, is unwilling to nix hotel space from the project’s requirements because it is outlined in the original agreement between the city and the state. Changes would require approval in Albany, which was hard to get in the first place, and therefore officials are afraid to open the process up again and risk any unexpected consequences.

At a time when New York City is seeing record number of tourists, it seems hard to believe that hotels would not be a hot commodity. But it has more to do with long-term, reliable income streams and, more crucially, banks general unwillingness to lend to developments in the city at the moment. Adding a hotel to a project makes it that much more complex of a deal and thus a harder sell.

That is why events spaces—bars, ballrooms, conference centers—are prominent features of many of the hotel proposals submitted by developers. They add reliable income that takes advantage of the waterfront and skyline appeal.

“It wouldn’t be a prime, prime location, but it is a good location,” Roland Demilleret told The Observer. A managing director at hotel consultancy HVS, Mr. Demilleret actually consulted on some of the projects, and he said there was a general excitement among the hotel operators but less so among the developers.

“The only problem I see for the site is it’s far from the business districts,” Mr. Demilleret said. “It won’t draw the commercial client, but the leisure client will still come.” He also said that hotels in Brooklyn still tend to be price-sensitive, less a first choice than a cheaper alternative to Manhattan, so the room rates cannot be too high. “As long as you keep it small, it will work,” Mr. Demilleret said. “I don’t think a 400 room hotel would work there.” The plan currently limits hotel rooms to between 170 and 225 rooms, the apparent sweet spot.

“We think a hotel is a great fit with the project and the site, and we have never thought twice about including it,” Brooklyn Bridge Park spokeswoman Ellen Ryan told The Observer last week.

Still, these challenges have not deterred the final three teams still in the running, Dermot, FXFowle and Hyatt with space set aside for the St. Anne’s warehouse theater; Toll Brothers, Rogers Marvel Architects and Hampshire Hotels; and Starwood Capital, Alloy Development, Bernheimer Architecture and nArchitects. (The winners were reported recently by Crain’s.) Not making the cut were bids from RAL, Extell Development, Two Trees and SDS Procida.

An announcement for the winner is expected in the next few weeks.

All three winners offer proposals with high-wattage design behind them, which is counter to what some competitors had said was a bias toward money above all else. It is an attitude that makes sense, given the conservancy’s desperate need for funds to keep the park afloat—85 acres of parkland, much of it built on piers, does not pay for their own maintenance.

Other entrants said that design has been an important part of the competition, pointing to the presence of notorious nitpickers Amanda Burden, the City Planning Commissioner, and James Polshek, chair of the Public Design Commission, as signs that quality architecture is just as important as the promised payment. “Some entries were definitely dismissed because they were not good enough,” one source said.

It echoes a commitment conservancy president Regina Meyer outlined to The Observer during a tour of the park in the fall, just before the finalist were announced. “In terms of design and pedestrian experience, we were real clear this was very important to us,” Ms. Meyer said standing on the path between the lush park and the vacant development site. “We don’t want anything to undermine our huge public investment in design already.”