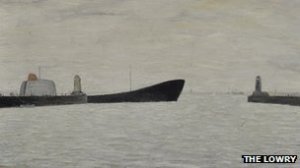 Art robberies these days seem to be more in the “look over there!” vein, but for the art dealer Ivan Aird, the experience was quite traumatizing and went far beyond a mere loss of inventory.

A man posing as a postman knocked on the door of the Aird family home on May 3, 2007. When Mr. Aird’s wife Louise answered, holding their young daughter, the man produced a 10-inch knife and three other men entered the house.

According to the Guardian:

“They tied me up with a cable and had a knife in my back,” [Ms.] Aird, 46, said. “They said they would slit my throat. Then they said they would kill the baby if we moved, that’s what they kept saying. They took everything out of the bottom half of the house.”

The gang stole 14 pieces of art, including several valuable LS Lowry paintings. Police found the paintings in July 2011, stashed alongside a “significant amount of drugs,” according to Click Liverpool. Two of the men pleaded guilty this week and have been sentenced, while another awaits sentencing next month. The paintings, too, have been returned.