“I want you to understand something. We lost Patton, we lost Patton on the beaches of Normandy and it is incumbent upon you to take up that mantle and to be fearless!” said the author and activist Pamela Geller.

Standing on on the bar of the Hell’s Kitchen lushing crib Sanctuary Monday evening, Ms. Geller was eulogizing right-wing firebrand Andrew Breitbart, who died suddenly last week at the age of 43.

Members of Manhattan’s small conservative media community gathered to mourn the late Mr. Breitbart, a bombthrower who relished fighting back against what he perceived as a liberal-dominated political press corps. The orotund provocateur made his name with outrageous, often humorous rhetoric and hard-hitting exposés, including publishing a series of undercover videos that led to the closure of ACORN and a cache of lewd photos and internet messages that brought down Democratic Congressman Anthony Weiner.

Mr. Breitbart’s mourners packed shoulder to shoulder in the narrow room and spilled out into the street. In her speech to the crowd, Ms. Geller mentioned the firestorm facing another conservative commentator, Rush Limbaugh, who recently called a young female contraception advocate a “slut” and “prostitute.”

“They would never be going after Rush this way if Andrew was still alive. We have lost the most fearsome of the warriors on the right,” Ms. Geller said.

Ms. Geller, who’s best known as one of the fiercest opponents of the so-called “Ground Zero Mosque” in Lower Manhattan, implored the conservatives in attendance to take up Mr. Breitbart’s mantle in the wake of his passing.

“You have to become more fearsome, more unafraid,” Ms. Geller said. “Ask yourself, what would Andrew do? That’s what you have to do. The man did not die and do everything that he did in vain. I beg of you, I implore you to find the culiones that may be sucked up inside you. Drop those balls!”

The toast to Mr. Breitbart was organized over email by WNYC blogger Karol Markowicz, New York Post editorialist Robert George and media consultant David Bernstein. They picked the tiny dive on 39th Street as the setting for their memorial because they expected a small turnout. After the invitation was publicized by the popular conservative bloggers Michelle Malkin and Glenn Reynolds, the size of the gathering ballooned to more than 100 admirers, including several employees from the Post, a contingent from the libertarian monthly Reason and members of the conservative rock band Madison Rising.

One of the Libertarians introduced The Politicker to Abe Greenwald, senior editor at Commentary magazine.

“I’ve never been in a bar in New York with so many Zionists in my life,” exlaimed Mr. Greenwald.

One man in the crowd wore a button emblazoned with a picture of Mr. Breitbart and the slogan “Breitbart is Here.” We overheard another showing off his new Facebook profile picture, a shot of he and Mr. Breitbart posing together.

“I took down Donald Rumsfeld for this one,” he said.

Ms. Markowicz was surprised by the huge crowd given the small size of New York’s right- leaning media scene.

“It’s very rare for me to walk into a room of conservatives and not know the great majority,” she said. “I don’t know everybody here. … Andrew’s bringing everybody together.”

Not everyone at the bar was a member of the fourth estate. Jordan Mishaan, a financial advisor with Merrill Lynch, said he decided to come after reading about the event on Mr. Reynolds’ blog, Instapundit.

“To world domination,” Mr. Mishaan said, as he raised a glass with the other mourners.

After Ms. Geller and Ms. Markowicz gave eulogies, a blogger named Katie O’Malley took a picture of the gathering on her phone to send to Mr. Breitbart’s wife, Susannah.

Though he was known to the world as a political animal, Ms. O’Malley and many of the others in attendance told The Politicker, above all else, Mr. Breitbart was a family man.

“He loved her so much, he loved his children so much,” Ms. O’Malley said. “As much as his eyes shined when someone called him a, you know, homophobic asshat, there was never a shine in his eyes the way it was when he talked about his kids.”

Not everyone in the room was a conservative. Tracy Westmoreland, the burly former owner of legendary midtown watering hole Siberia and Sanctuary’s self-proclaimed “minister of propaganda” presided over the festivities. Nevertheless, he informed us that he is the vice president and treasurer of the McManus club, “the oldest Democratic club in New York.” 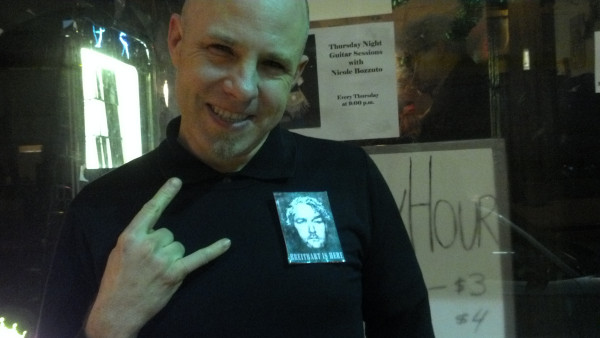