Former Englewood Mayor Michael Wildes, a Democrat, said he wants to run for Congress in the 9th Congressional District and is leaning toward a formal announcement.

“I have a full fundraising team, people are going out collecting petitions and I’ll be formally announcing my intentions to run for the 9th Congressional District seat by April 2,” Wildes told PolitickerNJ.com.

The immigration lawyer and former federal prosecutor said he has $700,000 plus cash on hand.

His entrance into the contest would make it a three-way Democratic Primary.

“No,” said Wildes. “No way. It looks like Pascrell may come in third, according to our polling.”

Wildes shared the results of that polling conducted by Hank Sheinkopf.

“As a result of their geographic supporters being split with another congressional district, the base support for each candidate is reduced, and the total number of Democratic Primary voters who are either frustrated or angry has increased,” Sheinkopf wrote in a March 5th memo to Wildes.

“…Only 23.1% of voters strongly support Pascrell, and just a few more percent, 28.1%, strongly support Rothman,” Sheinkopf added. “The more telling part of this question is the 15.4% and 14.2% respectively who are not considering Pascrell or Rothman under any circumstances.”

Citing his polling data that shows people tired of the fighting in Washington, D.C., Wildes would run as the change candidate.

At least one Democratic Party source speculated that Wildes was trying to leverage the poll to win support of the Bergen County Democratic Organization for state Senate Majority Leader Loretta Weinberg’s (D-37) seat in the event Weinberg decides not to run for re-election in 2013.

“What you have to understand about Wildes,” said the source, “is he has wanted to be a congressman since the time he was 18.” 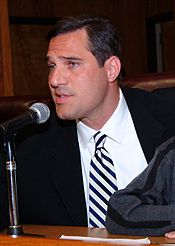