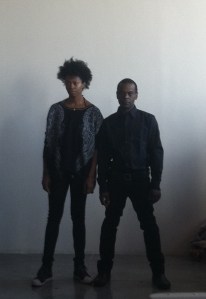 The artist Kara Walker had a surprise cameo today in Clifford Owens’s last performance in his exhibition “Anthology” at MoMA PS1. It was a resolution, it seemed, of what began unfolding last week when Mr. Owens made known to Gallerist in an interview his intention to force a sex act on an audience member during his last performance in accordance with a set of instructions Ms. Walker had given to him to enact. Yet, while Ms. Walker had supplied the instructions, or a “score” as Mr. Owens calls them (as did 27 other artists) she had no idea, we learned from her in an email, that he planned to take her instructions so literally for this performance, instructions which read, in part, “Force them against a wall and demand Sex.” As a result, she called off her involvement with the performance. Thus, when the door opened today and Ms. Walker appeared and walked slowly toward Mr. Owens, the performance, we knew, had taken a turn no one could have expected.

“Perhaps they are wondering what they will do or how they will react if they are chosen,” Ms. Walker said in her opening remarks, a show of empathy with the audience, many of whom, she added, may have read Gallerist’s article or heard about what Mr. Owens planned to do in this performance. She explained that she first heard of his intentions to force a sex act on an audience member in the article we published on March 8. She then told the audience what they could expect: Mr. Owens would say things like “I’m going to fuck your brains out,” and “You know you want it, baby” and “This is what you think I am, just a nigger toy.”

And while Mr. Owens performed the score similar to the way he had in previous performances, by walking around the room selecting audience members to move in on and kiss or grope, this time he seemed inhibited, somewhat emasculated, as Ms. Walker remained in the center of the room with him, as if on sentry duty, diffusing his machismo, at times kneeling and watching him as if ensuring that Mr. Owens didn’t force someone to engage in a sex act.

At other times, with an angry expression that felt very real, as if she didn’t want to be part of this, she challenged him with questions like “Why did you ask me to do this?” and “Why did you put me in this situation?” He would talk to her—”Kara, I need your help,” or respond, as if to the audience, “Why did you come here? What do you want from me?” or speak in soliloquy as he marched around with a glimmer of his normal cocksure attitude, “This ain’t nothing but a high tech lynching.” Mr. Owens and Ms. Walker would walk in a circle engaged in a kind of war of words.

“Do you want this cock in your mouth?” Mr. Owens said to the crowd at one point.

“Yeah,” a young white woman with blonde hair responded. She was in shorts and red lace-up shoes.

“Certainly,” she responded and smiled. He moved in but did not follow through on her suggestiveness taking her casualness as a rebuff. Later, the blonde woman told Gallerist “I was only responding the way I thought the script called for me to act.” She said she didn’t fear anything would happen to her.

That was the trade-off. While people seemed to feel somewhat entertained and comfortable rather than challenged by Mr. Owens, a comfort and complacency he had aimed to transcend during this final performance, the presence of Ms. Walker forced him to cede some control to her, as a compromise, it seemed, over how the performance would be carried out. And it was clear she was not up for anyone having a sex act performed on them involuntarily on her account, being that she maintains she has responsibility in the creation of “this evil scenario,” as she told us in her email. “The difference is,” she wrote, “my proposal exists as a slip of paper, a planted idea—the performer reserves the right to simply not do it.”

She was stepping in, it seemed, to prevent Mr. Owens from reserving the right to take action.

Yet, while the performance was scaled back, devoid of the kissing and groping that have become standard behavior for Mr. Owens in his performance of this score, Ms. Walker’s appearance made the event unique in a different sense.

“That was Kara Walker’s first live performance,” Mr. Owens said to the crowd. “We’re making all kinds of history, baby.”