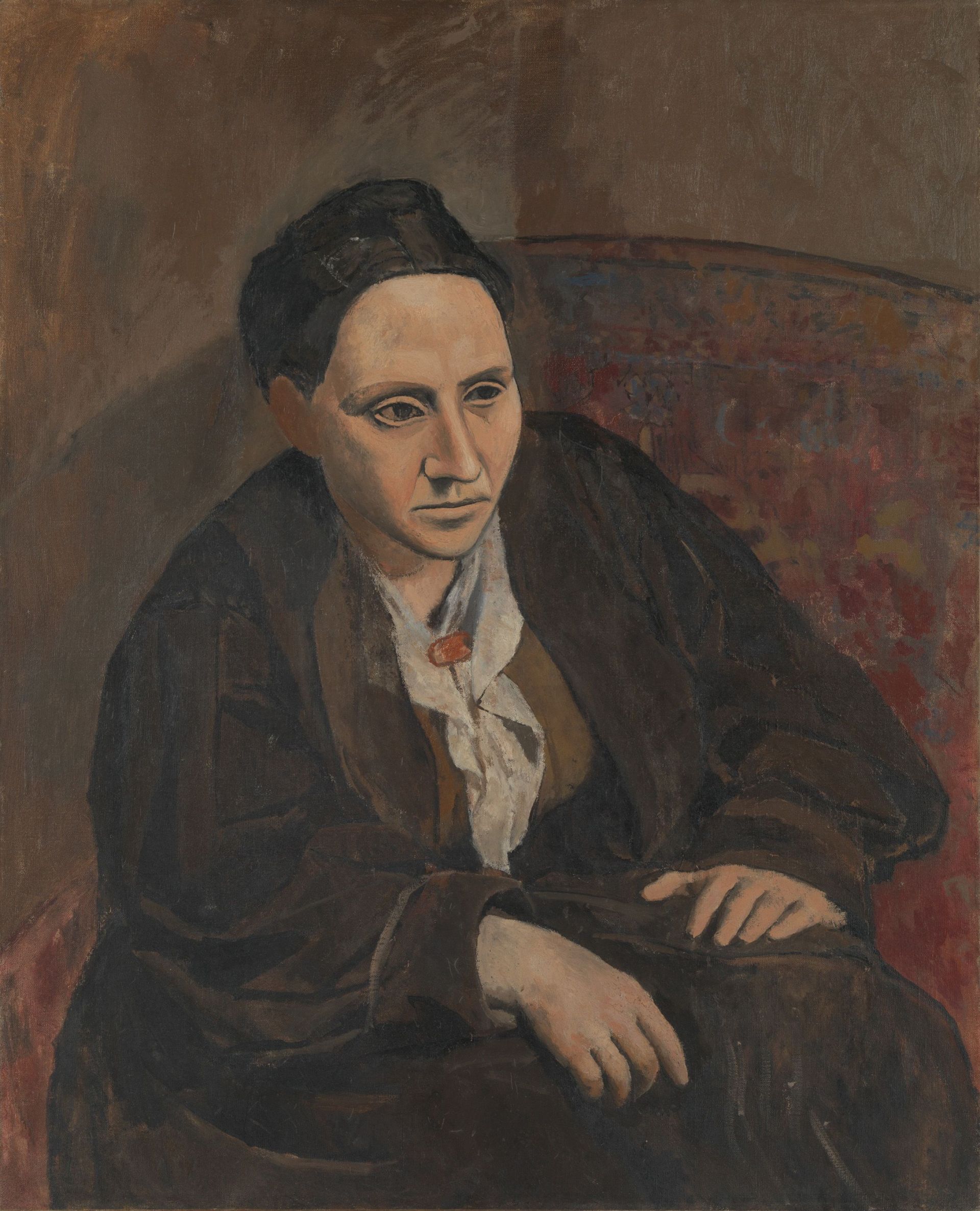 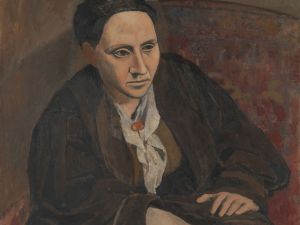 “It was like one of the best rooms in the finest museum except there was a big fireplace and it was warm and comfortable and they gave you good things to eat and tea and natural distilled liqueurs.” That is how Ernest Hemingway described the living room of the expat Americans Gertrude Stein and her brother Leo at 27, rue de Fleurus, in Paris, and it is only fitting that this room can now be experienced inside one of the world’s finest museums. The Steins have arrived at the Met in the form of the sprawling and fascinating exhibition “The Steins Collect,” where the siblings’ 460-square-foot living room has been meticulously reconstructed, revealing, through photographic projections, how their collection swelled, between 1904 and 1934, from a modest grouping of nine pieces to a tightly packed installation of dozens of dazzling paintings by the likes of Picasso, Matisse, Gauguin and Cézanne. This living room salon, and the relationships it engendered, is at the heart of the show about the Steins, which comes to the Met after runs at the San Francisco Museum of Modern Art (the Stein family was based in nearby Oakland) and Paris’s Grand Palais. It’s a show about the gratifications—aesthetic, intellectual, social—to be had from collecting contemporary art.

Leo and Gertrude were economical: “You can either buy clothes or buy pictures, it’s that simple,” she once said. They took five weeks to make the decision to purchase Matisse’s Woman With a Hat in 1905, viewing the painting repeatedly, taking in not only its wild and emotional colors—violets and greens smeared on the subject’s cheeks, a hat piled high with pink and blue fruit—but also the shock it caused. In an age when contemporary art is synonymous with excess, we have much to learn from these frugal collectors.

Other early standouts include a terrific Manet from 1873, a tiny ball scene that in very small black and white brush strokes renders with great vividness a Paris that had just vanished when the Steins arrived. But the Steins focused on the art of their time. “You have to buy the people of your own age,” as Gertrude put it. “There are always good new serious painters.” New art was not expensive, but it was controversial and risky: Each purchase meant taking a position on something whose value and importance had not yet been determined.

In Paris, the Steins reinvented themselves. Leo became a vegetarian; Gertrude wore outlandish costumes and frequented the bohemian studios in Montmartre (dealer Daniel-Henry Kahnweiler called her the “great man in her family”). The artists they collected adopted the family in return: Picasso took to Gertrude and painted her almost immediately, in his famous portrait of 1905-06; over the years he would give her a number of drawings. Matisse’s Boy with Butterfly Net (1907) features the young Allan Stein, son of Gertrude and Leo’s brother Michael, life-size among green hills on a red path.

On Saturdays, artists and writers would gather at the apartment to see the work the family favored. Among the shabby, solid furniture and under the firmament of paintings, Leo and Gertrude introduced Matisse to Picasso, initiating one of the great art rivalries of all time. Picasso’s Les Demoiselles d’Avignon was his response to Matisse’s Blue Nude. Initially, as one guest recalled, the “pictures had no value and there was no social privilege attached to knowing any one there.” By 1907, though, Gertrude and Leo could no longer afford magisterial pieces by Matisse: they’d been priced out of a market they’d helped to create.

In 1912, the heyday of Cubism, Leo and Gertrude quarreled over the style. When they parted as housemates in 1913, he took the Renoirs and left her the Picassos, confirming his classicism and her radicalism. Gertrude’s partner, Alice B. Toklas, moved in—they would remain together for the next 25 years—and Gertrude began promoting her own writing in earnest. A photograph shows her desk facing a luminous installation of Picasso studies for Les Demoiselles. She and Picasso remained close, and his The Architect’s Table of 1912 features Gertrude’s name on a calling card in the painting’s lower right. Gertrude kept up the Saturday salons, and at various times Ezra Pound, Man Ray, Mina Loy, Sonia Delaunay, Roger Fry, Wyndham Lewis, F. T. Marinetti, Marsden Hartley and Alfred Stieglitz all paid visits.

Michael Stein and his wife, Sarah, were the quietest of the clan. They came from San Francisco with 8-year-old Allan to stay for a year, and remained for 30. They are less known because they didn’t leave much behind: while Leo published art criticism and Gertrude poems and novels, Sarah burned her correspondence with Matisse before her death. Artists considered them the Steins with the best taste, and their early Matisses show an impressive range, covering everything from tiny landscape studies to major canvases; the Met has borrowed them from collections in Detroit, San Francisco, Canada, Australia and Madrid­—you are unlikely to ever see such a grouping again.

The couple helped fund the Académie Matisse, where Matisse taught from 1908 to 1910. The Steins themselves were students there. Sarah’s Standing Female Nude and Standing Male Nude (1908-11) shows her to be a competent pupil with a sense of volume and texture and an eye for color. Leo Stein’s Self-Portrait (1906-08), by contrast, is a mess: he smears toothpaste green as afterthought over a comically flat self-portrait.

After a brief stint at 58, rue Madame (where the Russian painter Wassily Kandinsky’s companion, Gabrielle Münter, was their upstairs neighbor), Sarah and Michael hired the architect Le Corbusier in 1927 to design a modernist home, and the Villa Stein-de Monzie, visible at the Met show in a flickering, minute-long home movie, was a masterpiece, the largest private residence he ever completed. The couple filled it with dozens of Matisse’s paintings and sculptures and their Louis XIV furniture, and entertained visitors like the artists El Lissitsky and Piet Mondrian; they sold it just before World War II and moved back to California.