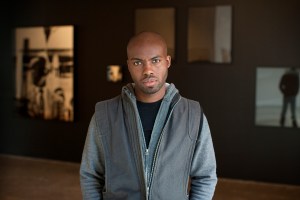 Two weeks ago, the artist Adam Pendleton was in his studio in Germantown, a small town in upstate New York, talking about Black Dada, a kind of conceptual manifesto that informs much of his work.

“It defies logic,” he said and let out a loud laugh. “It’s so illogical it’s almost humorous.”

Mr. Pendleton’s Black Dada paintings each contain a partial view, usually a corner, of a starkly rectilinear three dimensional object, accompanied by a single letter or two. The letters, which all derive from the phrase “Black Dada,” something that becomes more apparent when the paintings are arranged in large grids, usually suggest a word—for instance, “D A” or “L C K”—but never spell it out completely. The objects depicted are actually details of the famous cube sculptures by the late minimalist Sol LeWitt.

One of the first of Mr. Pendleton’s Black Dada paintings was hanging on the far wall of the studio, the lines of LeWitt’s cube creating a perimeter and an upper case “A” touching the edge of the canvas. Mr. Pendleton took the name Black Dada from the poem “Black Dada Nihilismus,” the 1964 poem by Leroi Jones, written just before he changed his name to Amiri Barak and became a black nationalist. Here’s a sample line: “Black Dada Nihilismus, for/the umbrella’d Jesus.” Like its use in that poem, Black Dada has no set definition for Mr. Pendleton, which is part of the point. It is what it needs to be. Mr. Pendleton says with a smile that it “dismantles history.”

Still, his Black Dada manifesto, which he wrote outside of Paris in 2008, begins: “it’s a matter of fact.”

Mr. Pendleton has just signed with the powerful blue-chip Pace Gallery; at 28, he is the youngest person to do so since the 1970s, according to gallery president Marc Glimcher. There is a certain symmetry to the match: since 2007, Pace has represented the estate of Sol LeWitt, and the cubes shown in the Black Dada paintings are, Mr. Glimcher pointed out, sitting in Pace’s warehouse. But Mr. Pendleton, who became something of an overnight superstar after his performance The Revival during the 2007 Performa biennial, has largely been without representation from a commercial gallery for years. He’s made it work for him—his work is already in the collection at MoMA, where he will be included in the museum’s “Ecstatic Alphabets/Heaps of Language” exhibition next month. His first show with Pace will be at the gallery’s Soho London branch this fall.

Until then, Mr. Pendleton will be holed up in his library, which is what he prefers to call his studio. It seems appropriate as a place of study, as Germantown is secluded enough that it, at times, gives way to certain clichés: during a recent visit there, a rooster could actually be heard crowing on the roof. He spends most days there writing, reading books, and, often, rearranging them.

“I spend a lot of time making these stacks of books,” he said, “Almost trying to see what kinds of things are related to each other and how.”

He gestured to a tall pile of books on the floor. On top was The Short Century: Independence and Liberation Movements in Africa 1945-1994. He took The Short Century off the pile and placed it on the floor, revealing underneath it a design book called Crafting the Modern World: The Architecture and Design of Antonin and Noémi Raymond.

“It’s sometimes just as simple as—” and here he took Crafting the Modern World off the pile and tossed it atop The Short Century. It landed with a loud thud, which completed Mr. Pendleton’s sentence. On top of the pile now rested a thick monograph on Jean-Luc Godard.

“I’m sort of looking for a complex realism,” he said. “You have Godard, and you put him in relation to The Short Century and it becomes something very different. I’m looking for a reason to look at something again.”

Mr. Pendleton came to New York from Virginia in 2002, when he was 18, with the intention of becoming an artist. His father drove him and a few of his paintings in the family van. At first, he would send out slides of his work to galleries and then show up at the galleries in person and ask them point blank if they’d looked at his slides. One day, he walked into Gallery 128 on the Lower East Side, owned by Kazuco Miyamoto, at the time one of LeWitt’s assistants. Ms. Miyamoto remembers the young artist coming to the gallery—with his father, she said—and showing her one of his paintings. She included it in her summer group show. LeWitt came by the gallery one afternoon to check with Ms. Miyamoto about the progress of one of his own works and spotted Mr. Pendleton’s painting. He bought it by trading one of his own pieces for it, becoming Mr. Pendleton’s first collector.

Hearing of LeWitt’s interest confirmed Mr. Pendleton’s feeling that his own work was conceptual, rather than abstract painting. “I was like, ‘Well naturally he would want this brave piece of conceptual art.’”

Over time, he began incorporating more text into the paintings. He joined the Yvon Lambert Gallery, which has since closed its New York location, and had his first solo show there in 2005, of paintings with block letters screen printed onto them spelling out phrases like “I need to be loved” and “because I cannot forget be careful beware.” His interest in language, he says, stems from reading his mother’s books as a child—writers like Adrienne Rich, Audre Lorde—as well as admiring the work of other text-based painters like Liam Gillick, Roni Horn and Terry Winters. By the time he wrote his Black Dada text in 2008, he had become a clever lexical trickster. On paper, it looks like a poem, written out in different columns and numbered stanzas, but it is perhaps better thought of as a sculpture made of words with no linear meaning to follow. Even so, it manages to come across like a self-assured diatribe:

“it’s a matter of fact/a full moon hanging in a low sky irradiates the day with a milky glow/now i am older and wiser/going in a taxi from the train station/she was a unit in a bum space; she was a damaged child/so did i love/regular communication by email with a commitment to responding within a reasonable time frame/sigh and then breath[.]”

His refinement of Black Dada came out of his performance The Revival, at 2007’s Performa biennial. In a kind of secular sermon, Mr. Pendleton wore a white tuxedo jacket, black pants and bright green shoes and stood in front of a 30-person choir. He’d filled the room with black cube sculptures, which he imagined as the work of some “forgotten black Minimalist.” His homily—called “a dream of an uncommon language”—consisted of language borrowed from John Ashbery, Charles Bernstein, Donald Hall and others (“all language is borrowed,” Mr. Pendleton said ominously in the library). The poet Jenna Osman and Mr. Gillick gave “testimonials.” RoseLee Goldberg, Performa’s director, said the piece was a year in the making. She would talk to Mr. Pendleton frequently as it was coming together, the conversations frequently turning to the Dada movement; a large survey of the early 20th century “anti-art” movement had just been put on at MoMA.

In its concern with words and appropriation, The Revival was a kind of manifesto of Mr. Pendleton’s approach to both language and art history, but the concept of Black Dada is an ongoing statement about, in Mr. Pendleton’s words, “What kind of person can make those claims.” It is a sort of umbrella concept that informs his other work, like the so-called System of Display pieces. Those are often mirrors with letters or half-spelled out words (or simply the suggestion of a word) and a silkscreened image of one of Mr. Pendleton’s stock images that recur in his work—Anna Karina’s face in Godard’s trainwreck Made in U.S.A. film or a photograph by Ian Berry of a couple dancing in the street during a celebration of independence in Congo pulled from The Short Century. The dancing couple will make an appearance in one of his works in MoMA’s “Ecstatic Alphabets” show, silkscreened onto a series of paneled mirrors. The image will be disrupted by the Black Dada text, which will be printed onto the work in its entirety. Taken out of its context of a book about African liberation movements and placed into the world of Black Dada, the image becomes strangely seductive. It stops being about a specific moment in history or politics, and becomes instead about history and politics as ideas, or even just as words.

“This is an image that was taken in 1960, during a celebration of independence in the Congo,” Mr. Pendleton said, “but I don’t think that’s what you think about when you look at that image. I don’t think you say, ‘Oh my God. They’re free.’ You know? It could be anything really.”

Black Dada is deliberately vague, but Mr. Pendleton has more or less settled on who he would call a Black Dadaist.