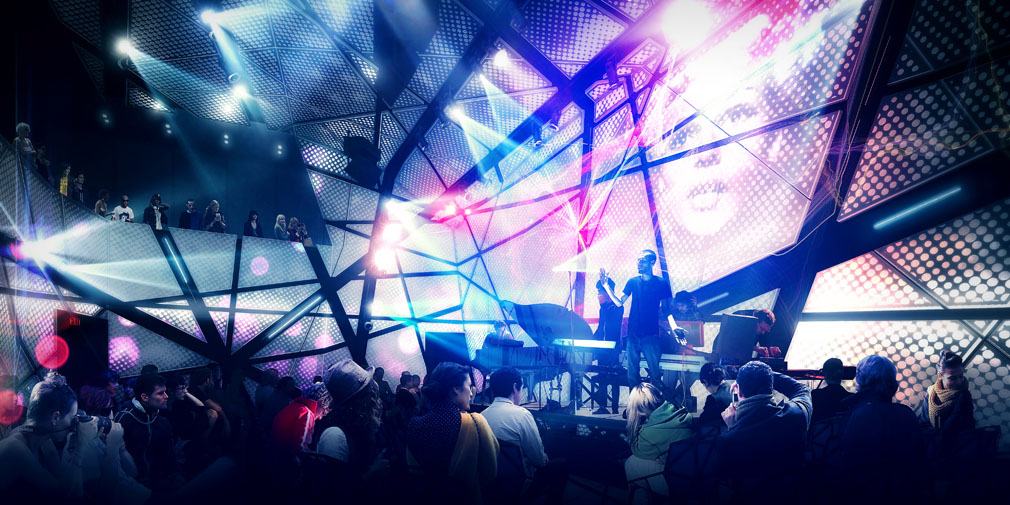 A new performance space catering to up-and-coming artists is in the works in Williamsburg. 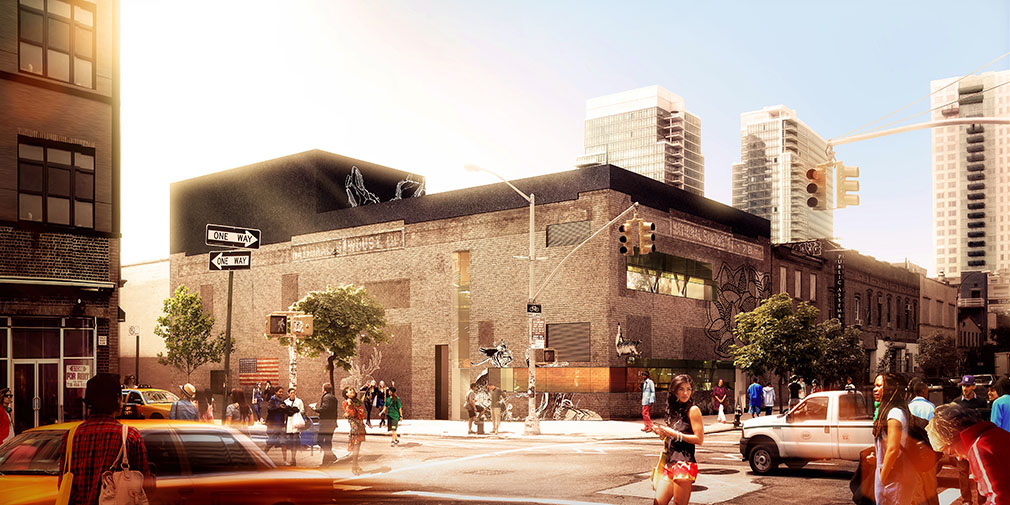 The project is located inside an old sawdust factory on the corner of Berry and North Sixth streets on the northside. 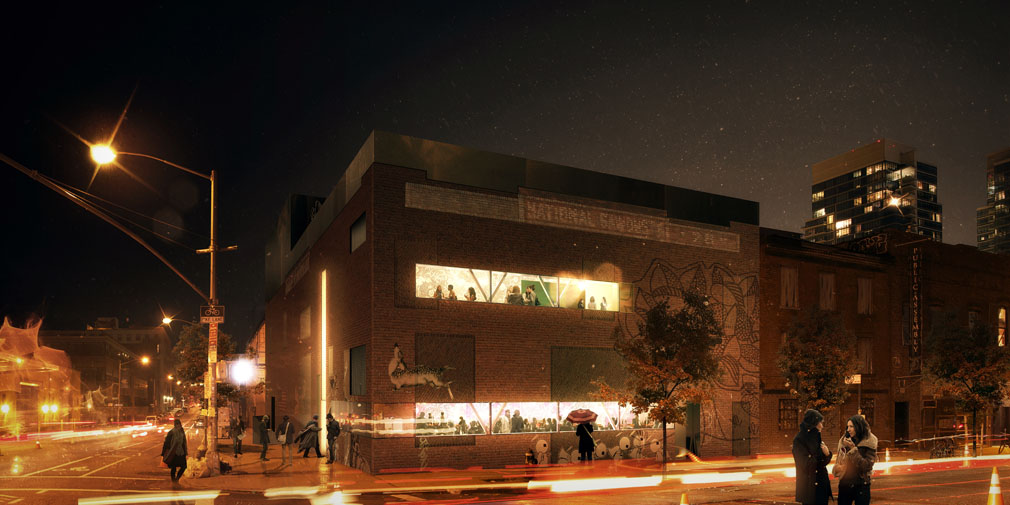 The facade will be largely preserved, including original signs and newer graffiti, though new windows and entryways will be punched through the space. 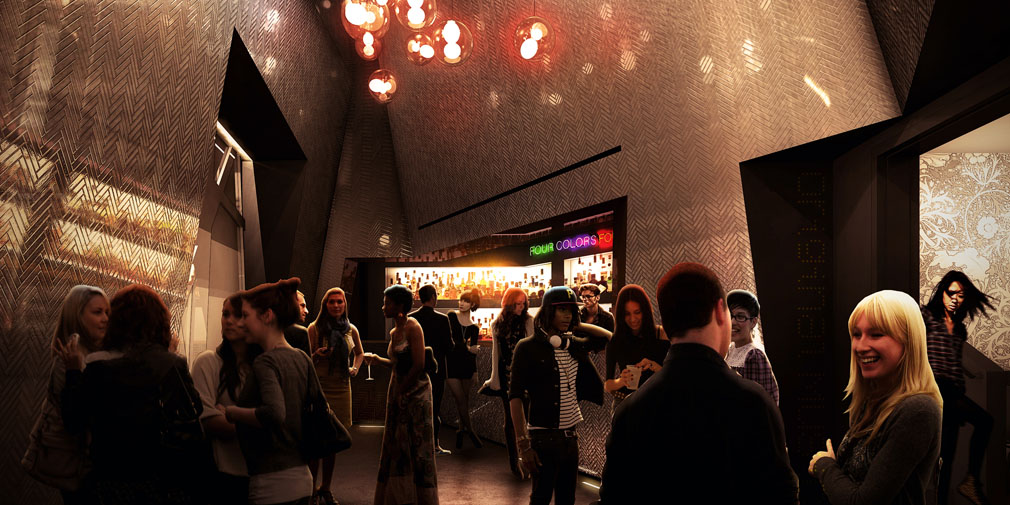 Inside, the lobby contains a bar with a restaurant to the right and the performance hall at left, behind a 10-foot by 10-foot metal door that doubles as the curtain.
Advertisement 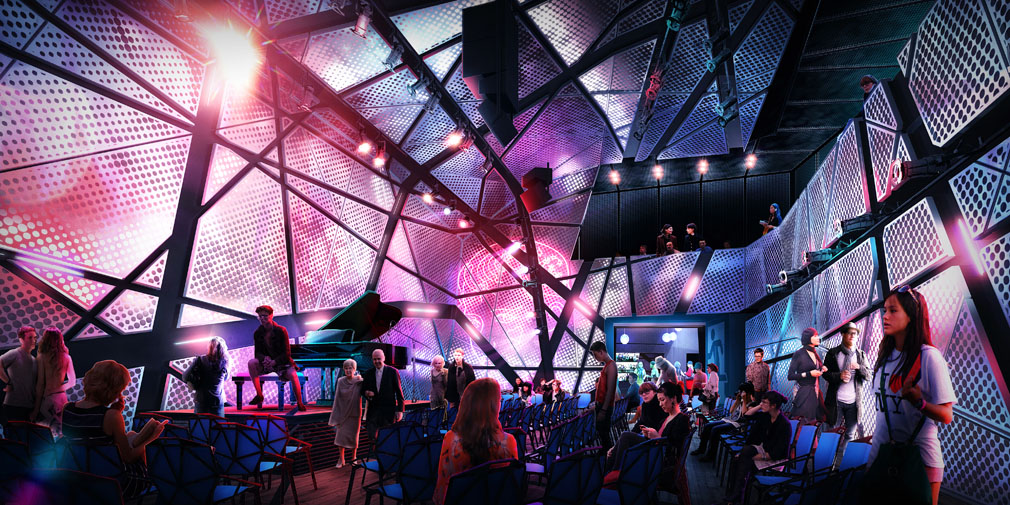 The space is meant to accommodate a range of performance types, from acoustic to amplified, from classical to jazz to electronica, though always with an emphasis on the new. 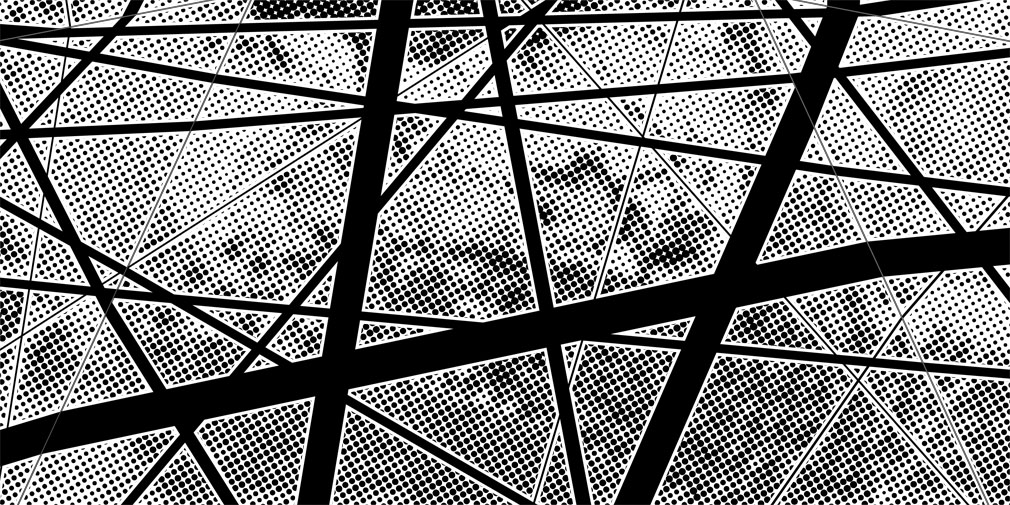 A pattern for the interior walls. 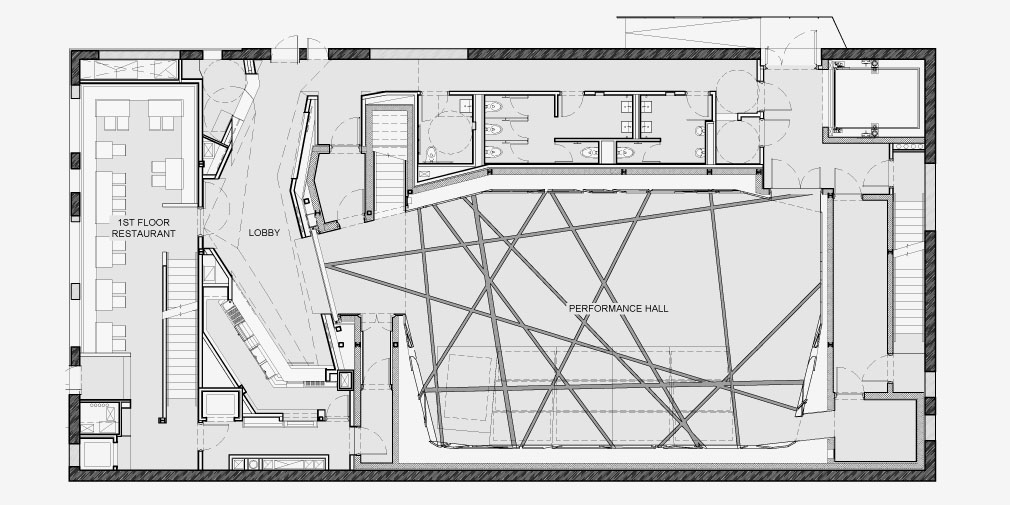 The floorplan for the space. 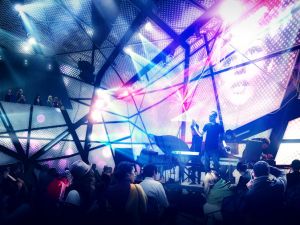 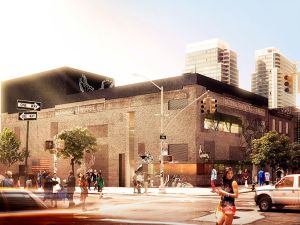 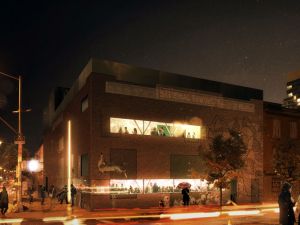 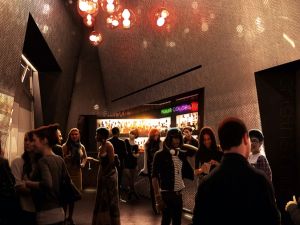 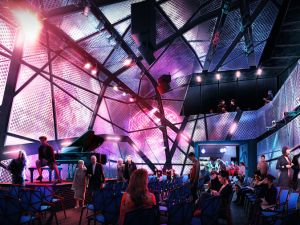 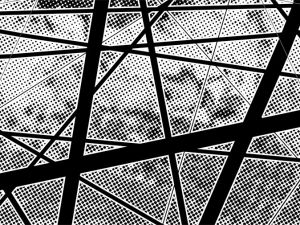 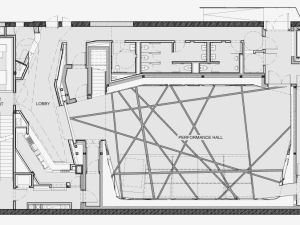 Now performing on North Sixth Street (even if Northsix is long gone, replaced by a Manhattan concert conglomerate) is the Original Music Workshop.

Conceived by Kevin Dolan, a former tax attorney who also happens to be an organ virtuoso, the Original Music Workshop seeks to provide a venue bridging new and old Williamsburg, sustaining music of all types for all ages. As the rest of the neighborhood continues its inexorable gentrification, Mr. Dolan hopes to preserve a tiny corner of Williamsburg cultural past, as well as one of its historic industrial buildings.

“It’s amazing you can knock down anything and build whatever you want,” Mr. Dolan said in an interview. “I’m hopeful that at least the south side of this block will still maintain its feel into the future.”

The project began three years ago, in a small townhouse Mr. Dolan had hoped to turn into his perfect music space. He met local Williamsburg architecture firm Bureau V through a mutual acquaintance, and when they realized Mr. Dolan had far greater ambitions than his small site, they set about finding one. “A very interesting part of the project was that, after the house, we were, with the help of ARUP, very involved in the design of the entire concept,” said Alexander Pincus, one of the principals of Bureau V. “There was no programming, no building, no agenda for at least a year.” ARUP is the acoustical engineer on the project.

The designers set about scouring Brooklyn and parts of Manhattan until they found an old sawdust factory on the corner of North Sixth and Berry streets, a century-old sawdust factory—a painted sign near the roof still reads “NATIONAL SAWDUST,” which the facility produced at least until the 1940s, as old photos show. (For those confused by the concept of a sawdust factory, it was used for heating.)

“I don’t believe in fate, but the location, the architecture, everything about it was just ideal,” Mr. Dolan said. It was not an easy negotiation, though. “Even in the doldrums of the market, that real estate wasn’t cheap.” There were two other bidders for the property, which meant Mr. Dolan had to pay over ask, be he believes the seller ultimately chose him because of the project he planned there was more than another tear-down. “I think I got it on the merits of the use,” he said.

According to city records, Mr. Dolan paid $2.33 million for the former factory, and he said the entire project will cost about $15 million. The building had been vacant for a decade, but before that it had been producing those tiny colored pebbles that fill fish tanks, and was still full of them when the task of renovation began.

The former factory will continue to be a production facility of a sort. More than just a concert venue, Mr. Dolan is set on creating what he called an “A-to-Z support structure” for modern musicians. The space will also accommodate rehearsals and recordings, with room for up to 70 musicians during record sessions. For performances, a movable stage will accommodate between one and a dozen performers, with seating for 120 to 180 guests, up to 350 standing.

“It is a facility for which there is a tremendous need, it will be 24-hours a day, 7-days a week” said Paola Prestini, the celebrated young composer who was just named the creative director for the Original Music Workshop. Ms. Prestini said too often similar rehearsal and recording spaces were only open limited hours or had inferior acoustics. “What we’re trying to do with our project is serve the needs of the 21st Century artist,” she said.

The performers will cut across a wide artistic swath, from classical to jazz to electronica. The Observer suggested Le Poisson Rouge, the cutting-edge venue in Greenwich Village. Mr. Dolan responded that “that’s close, but we’re looking at one stratum down, the next big thing, though we will also be working with established artists from time to time.”

To that end, the Original Music Project is hoping to foster new talent through mentoring and residency programs, where artists can call the new space home for a series of time, working on new work or helping others form their own compositions.

This will all be achieved in a revolutionary space conceived by Bureau V. Mr. Dolan said he greatly preferred the old music halls of Europe. “I certainly do not want a black-box theater,” he said.

“Too often the space disappears, and Kevin did not want that, he wanted the space to be present, part of the performance” Peter Zuspan, another Bureau V principal, said. “With this, it’s kind of just a room—no fly space, no wings, no curtains, just a room. It’s a very classical idea.”

And yet the focus remains on new artists, new ideas, the cutting edge, which is certainly exposed in the design of the space. While the exterior of the building remains intact, inside is a mass of steel beams metal mesh, all with exacting perfomative standards. “This is not some historical pastiche,” Mr. Pincus said. “We’ve got 15-inch-thick brick walls, which you could never afford to build these days. The building is still very purposeful.”

Affixed to the brick interior is carefully crafted acoustic paneling, which is overlaid with the metal lattice. This not only supports the mesh but also contains all electrical, lighting, pass-throughs and all other elements required for performance and recording. The shape may look random, even haphazard, but it was all carefully tailored through hours upon hours of precise computer modelling, one of Bureau V’s specialties. (The firm is working on a similarly unusual residential development next door, which is still in the early planning stages.)

The bi-level space also includes a restaurant, still being developed. So the musicians and the crowd really do have everything. “We want to nurture artists who have not yet made it onto the other stages of New York,” Mr. Dolan said.