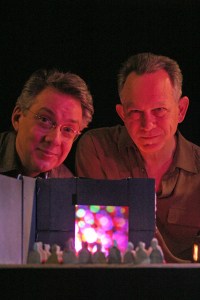 Joshua White founded the Joshua Light Show in 1967, not knowing at the time that he would be helping guide countless hippies toward good acid trips with what he describes as an “artisanal psychedelic light show.” In 1968, the show earned a residency at New York’s Fillmore East, which had opened that spring. For about two years, Mr. White and his crew stationed themselves behind a large screen on stage, and improvised multimedia projections for bands like the Grateful Dead, Jimi Hendrix, Jefferson Airplane, Janis Joplin and Frank Zappa. He did the lights at Woodstock, but quit the psychedelic light show business not long after.

“Woodstock was just a terrible, awful-idea disaster that turned out to be this giant amazing thing,” he said a few weeks ago, sitting at the kitchen table of his collaborator, the painter and illustrator Gary Panter, at Mr. Panter’s house in Ditmas Park. “It was impossible. And we went to do our light show on a screen that was three times bigger than anything we’d ever worked with before. At the Fillmore you went and sat in the theater and the screen was this big,” he said, making a sweeping gesture with his arms. “At Woodstock, it had no impact on the audience. It might as well have been a postage stamp. I actually realized that what I do wasn’t going to exist anymore. I didn’t think it all the way through, but if 400,000 people could show up to this disaster and break down the fence and have it still become this historic event, then someone was going to organize something again and one thing they wouldn’t have was the hand-made artisanal psychedelic light show. So I walked away from it. Things were changing. Nixon was elected president. Cocaine became the new drug. That’s an evil drug. I felt that I needed to move on.”

He became a television director, doing light shows on the side, but he’s since retired, and recommitted himself to his psychedelic craft more or less full-time.  Mr. White and Mr. Panter started working together long after the hallucinogenic buzz of the ’60s wore off. A prolific painter who designed the sets for the short-lived TV show Pee-wee’s Playhouse, and became something of a cult hero with his comic book Jimbo, Mr. Panter started working on his own small-scale light show at Williamsburg’s Pierogi Gallery in the ’90s. One night, Mr. White attended at the suggestion of a friend—they both remember him to be the audience’s only member that evening—and he approached Mr. Panter after the show, not realizing he was one of the artist’s childhood heroes. They now work together as Joshua White and Gary Panter’s Light Show (“The only reason I get first billing is because I’m older,” Mr. White said). In February, they opened a three-month-long installation inside the 22,000-square-foot space of the Museum of Contemporary Art in Detroit (MoCAD), an arts institution on Woodward Avenue, the country’s first paved road, inside the former showroom for the long-defunct Standard automobile line. It is the pair’s largest project to date (and for Mr. White that includes Woodstock), taking them effectively out of the rock clubs and into the realm of fine art.

“This is the kind of stuff I saw on bad trips in the ’70s,” Mr. Panter said, sitting at a computer with Mr. White in a makeshift studio in the third-floor attic of his house. Mr. Panter wore crummy jeans and a black T-shirt, his gray hair arranged in a messy coil atop his head. Mr. White wore a fleece sweater and glasses with yellow-tinted lenses. They were looking at an image of a sculpture by Mr. Panter hanging in MoCAD, a twisted tangle of PVC pipes and mirrors cut into cloudlike shapes that descended from the ceiling and reflected the white light from a projector onto a 25-foot-long screen near the museum’s entrance. There were prototypes made of chopsticks and tape strewn about the studio. There were also old boom boxes hanging on the walls, and unframed paintings on the floor, scattered among boxes of CDs, tapes and records marked by subgenre (“punk,” “post-punk,” “punk-y”). But for now, Mr. Panter and Mr. White were fixated on the mirrored sculpture. “When I first saw this thing completed, it was like an alien presence,” said Mr. Panter. “It was very exciting to me. And I wasn’t being tortured on LSD at the time.”

Light shows date back to the early ’60s, when nightclubs in New York were still called discotheques. “I don’t mean discos,” Mr. White said. “I mean first-wave discotheques, which were basically restaurants where they’d clear the tables and there’d be a little bit of dance floor and people would go out and have a meal and then somebody played records. Nobody had figured out how to do the lighting for that, so I went into business doing discotheque lighting. Not a highly rewarding business.”

It essentially involved lights changing from red to blue to green and then back to red again, mostly in time with the music. Mr. White says this period of his life was when he began “to see the light.”

At MoCAD, their installation is very much the culmination of decades of work, both together and solo. Mr. Panter’s skills as a painter shine in the detailed psychedelic patterned wallpaper that responds to the changing lights. The structures that adorn the space range from the complex (as with the mirrored sculpture) to the infantile, like the flat cartoon face with its mouth open in a Mad Hatter smile that is propped up over a doorway. It looks like it could have been a rejected set piece from Peewee’s Playhouse. The light dates back to Mr. White’s discotheque days; it’s sometimes as simple as red turning to blue and green, then back to red—less retro than reminiscent. At the opening in February, Cary Loren, a founding member of the Detroit punk band Destroy All Monsters, played inside the light show. There were 10 percussionists, an electric violin, saxophone, bass and Mr. Loren, who screamed into a microphone while abusing the strings of his guitar. The performance was a tribute to his onetime bandmate, the artist Mike Kelley, who died a few weeks earlier.

In the museum, a side room is dedicated to ephemera from the careers of Mr. White and Mr. Panter. There are issues of Jimbo and paintings by Mr. Panter, as well as Mr. White’s contract with the Fillmore and a video excerpt of one of the best known Joshua Light Show endeavors, the party scene that is the centerpiece of the 1969 John Schlesinger film Midnight Cowboy.

“Your crew is in the party scene, right?” Mr. Panter asked Mr. White in the attic studio as they discussed the film.

“Thank you, I’m glad you asked that,” Mr. White said, now reclining with a smug grin in a chair in the corner of the room. “I didn’t want to rub it in, but what happened was John Schlesinger and Jerome Hellman, the producer, wanted to have an authentic Warhol party. And it’s a turning point in the movie, because it’s where the character,” by which he means Jon Voigt’s aspiring male prostitute, Joe Buck, “goes from being a total loser to actually picking someone up, and they’re in this Warhol party and they’re picked up by the Warhol people. Big mistake. Because these were people that were kind of running on a lot of speed and everything. So they came to us instead. They were the art world. We were the music world. And we said, ‘We can design that for you.’ We built a set and we provided that sense of light and color.”

In real life, he added with a sigh, “it never got as good as that.”