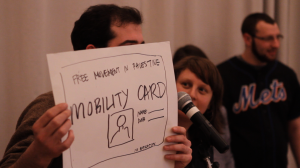 Before meeting her on Thursday night, The Observer had spoken to Dana Yahalomi, the leader of Israel’s Public Movement art collective, only via Skype. “Yeah, I’m better in life,” she deadpanned, after greeting us at Artists Space’s new event space and bookstore down in Tribeca.

She’s formidable in person—tall and professional in a dark navy skirt and jacket, a billowing scarf around her neck—just the type who could convince a museum to let her stage a series of events, discussions and interactive exercises on controversial topics as part of a landmark art exhibition. (Last month they discussed rebranding Park51, the so-called “Ground Zero mosque.”)

Which is what Ms. Yahalomi has done for the New Museum’s triennial, up through April 22. Thursday was the fourth event—or Salon, as she terms it—on the topic “Birthright Palestine?” The group is exploring the creation of a Palestinian analogue to the program that brings thousands of Jews to Israel on free trips each year.

A few dozen young men and women were arrayed around six tables, all charged with discussing various birthright-related topics and crafting declarations from their debates to present after 90 minutes.

We started at the “Mapping Zion” table, where Jewish studies professor Rachel Havrelock presented an almost-two-millennium tour of Israel from various maps—Biblical, Ottoman, British etc.—and ended up staying for quite a while.

As Ms. Yahalomi wandered among the groups, checking in like a mother hen, we slipped to the marquee table, “Birthright Palestine?” where triennial curator Eungie Joo was sketching a “mobility card” for Palestinians with black marker on white poster board. “I really don’t want us to define Palestinian identity,” one bespectacled man said emphatically.

Ms. Joo concurred. She hasn’t identified as a North Korean, she said, but some of her ancestors were born there. “When I applied for my visa to go to North Korea, I was welcomed by the committee for overseas North Koreans. For them, I am a North Korean who was displaced by the war.”

As Ms. Yahalomi declared that time was running low, the groups hastily scrawled their statements on posters. “You actually made the declarations!” she exclaimed, smiling at the surprise consensus. “I’m not supposed to say that I was not expecting that!” Laughter erupted.

But Public Movement’s grand finale is yet to come. It begins with a vote at the New Museum on April 15. “If the vote is in favor, then we will activate the last action of Public Movement in New York and hopefully start building towards Birthright Palestine,” Ms. Yahalomi said. “And if the vote is against, then we cancel the final action and no more”—her voice deepened—“no more of this project.” 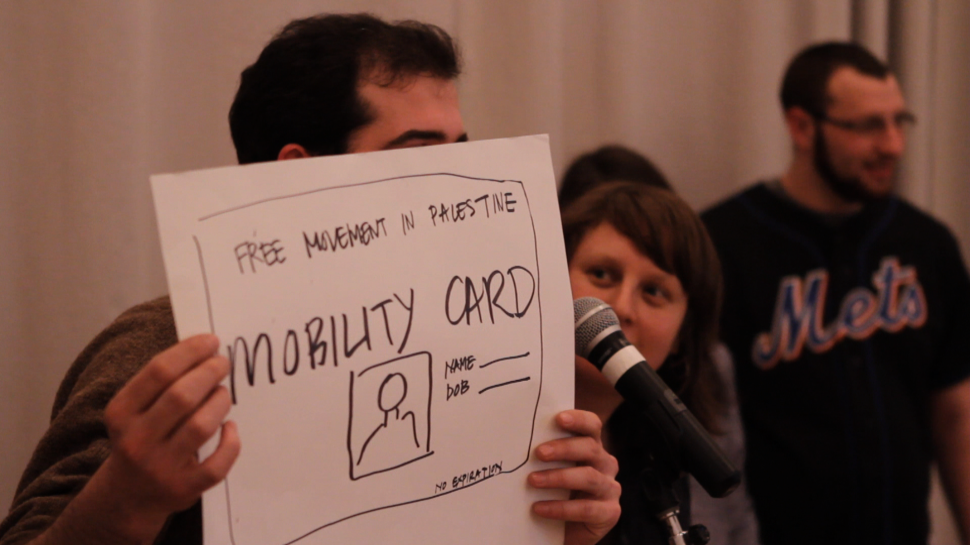