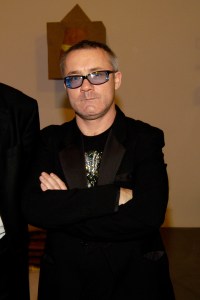 Here is your inevitable “How is Thomas Kinkade Different from Damien Hirst?” article, courtesy of Canada’s Globe and Mail.

The article begins by saying that Kinkade is kitsch and that Jeff Koons, despite selling for more money, is also kitsch but with “creepy sexual overtones.”

The writer continues: “Kinkade’s intentions, on the other hand, were never ironic or critical: He found that people really loved chocolate boxes, and chocolate boxes he painted.”

Well…maybe! What could we possibly know about Kinkade’s “intentions?” Maybe he found that he really loved money, and painted chocolate boxes because of that. Wouldn’t that be something?

So here’s the kicker:

I’m surprised no one is comparing him to Damien Hirst, the most profitable British “high” artist. They have been reviled for almost identical reasons by the press. Hirst, whose current retrospective at London’s Tate Modern has garnered largely scornful reviews from the art intelligentsia, has been criticized for his determined profit-seeking, for inflated prices, for using assistants to produce his work, even for a general lack of originality (many artists and illustrators have accused him of copying their work). But Hirst is seen as a conceptualist – his art is these brilliant money-making ideas themselves.

Uh, but perhaps Damien Hirst found that people really loved spots, and spots he painted! We’ve spent no small amount of time talking critically about Mr. Hirst ’round these parts, but this argument feels a little half-baked. We couldn’t resist the comment section of this article, which naturally has people feeling a tad frustrated (as people tend to feel on the exciting world of the Internet). This was a good one: “I’m trying to think if this is the stupidest arts thing I’ve read in the Globe since William Thorsell earnestly compared Andrew Lloyd Webber to Verdi.”