According to CNN, Newt Gingrich plans to formally end his White House bid and endorse Mitt Romney at a campaign event in Washington D.C. next Tuesday. Prior to Mr. Romney’s five state primary sweep last night, Mr. Gingrich indicated he would “reassess” his campaign if he was unable to win the primary in Delaware, where he focused much of his energy in the past few weeks. Mr. Gingrich ended up losing that contest with just about 27 percent of the vote compared to 56 percent for Mr. Romney.

Over the last few months, Mr. Gingrich’s quest for the nomination increasingly became an impossible, sisyphean effort under the weight of Mr. Romney’s string of primary wins. In a speech to supporters in North Carolina last night, Mr. Gingrich congratulated his rival on his victory and promised he would “think carefully” about his next move.

“I want you to know that over the next few days we’re going to look realistically at where we’re at, but I also want to do that as somebody who’s a unifier and somebody who’s realistic,” he said. “We are going to think carefully about how we can be the most helpful to this country and how we can make sure, one, that Barack Obama is a one-term president, period, and two, we want to make sure that we send the best strongest possible signal to Tampa that we want a conservative platform, and we want the values that go back to Goldwater and to Reagan to be fully represented.”

Mr. Gingrich, who said he was staying in the race “to articulate big themes and big issues” at last week’s New York Republican Party dinner, still plans to continue with his scheduled campaign swing through North Carolina this week. During his last hurrah in the Tar Heel State, Mr. Gingrich will throw out the first pitch at a college baseball game and indulge in one of his favorite amusements–a trip to a zoo. 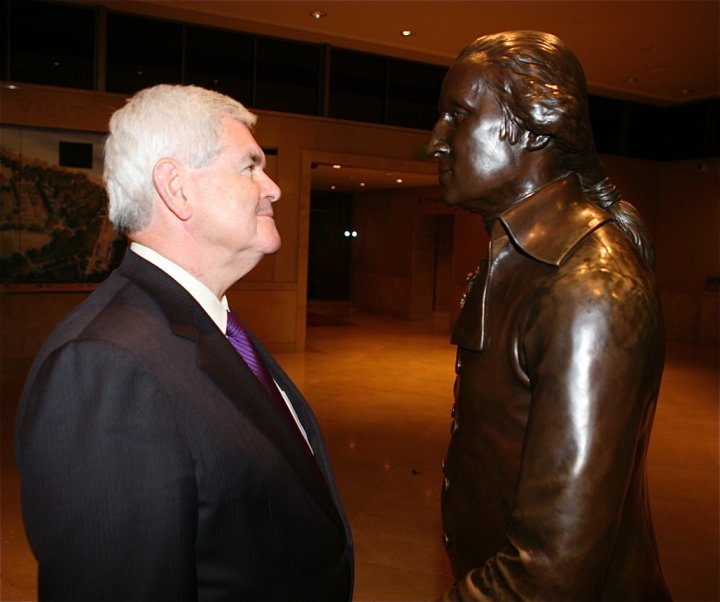